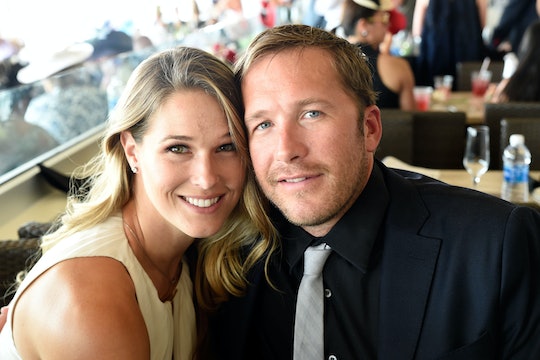 “She’s stumped us on names so far.”

Olympian Bode Miller and wife Morgan welcomed their baby girl seven weeks ago, and she still doesn’t have a name. The parents of eight have taken to calling her “Ocho,” which is Spanish for “eight,” but beyond that they can’t seem to narrow their choices down to just one. And so they’re reaching out to their followers on social media for help.

“It’s hard because her personality is different, and I think we’re all trying to get used to it,” the couple explained in an interview on TODAY on Wednesday. “She’s stumped us on names so far. We have a lot that we like, but she hasn’t smiled or high-fived or anything when we say them to her, and we say them to her all the time.”

So far the couple are thinking of a few names in particular for their baby girl: Olivia (but they would call her Liv), Scarlet (with the nickname Lettie), and Skylar. “All kind of have a special meaning to it,” former pro-volleyball player Morgan Miller told TODAY. “So we may have to reach out to our social media followers and ask for some assistance because she has not really been giving us many answers.”

And so they are asking the internet, famous for giving answers the world over.

Bode and Morgan Miller need a name for their baby.

Morgan shared a photo of their new daughter on her Instagram Story with the message “We need your help picking her name!” She then shared their preferred options, Scarlet, Skyler, and Olivia, along with video footage of her sons holding their little sister. She also noted that they need help finding a middle name, and that they “may still call her by her middle name like my older boys and my husband.” The middle name choices are Olivia, Khione, and Grier. Then followers are asked to vote on combinations of names.

The couple are parents to seven other children, including 6-year-old son Nash, 3-year-old son Easton, and 2-year-old twins Asher and Aksel. Bode has two children, 13-year-old daughter Dace and 8-year-old son Nate, from previous relationships, and sadly the parents lost 3-year-old daughter Emeline in a tragic drowning accident in 2018. Naturally, both Bode and Morgan Miller are thinking of their daughter Emeline now that they’ve welcomed another little girl into their household of boys. “Emmy was such a great balance because she was such a powerhouse and then when she passed, it was shocking because you really felt this energetic shift in the house," Bode told TODAY. "Obviously we were all suffering and everything, too, but there was this gap there for all the boys. And now they have this little girl. It just makes them gentle. You'd be blown away."

The busy parents said that this little baby girl will be their last child, which means this is the last chance their followers will have to name a baby with them. Food for thought.