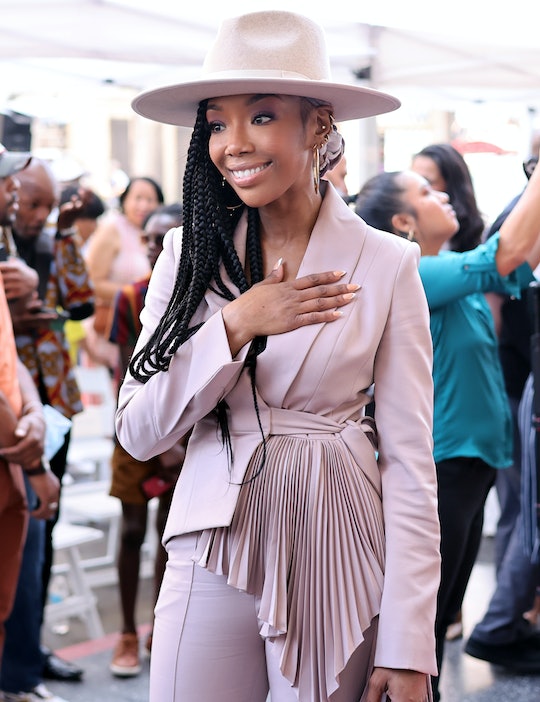 Brandy Will Play Cinderella Again In The Disney+ Movie The Pocketwatch

Time to get fitted for those glass slippers again!

Fairy tale fans, get your sparkly tiaras ready! It’s time to dust off your magic wand, call up your fairy godmother, and make sure your iPhone is charged when those digital hands strike midnight. Iconic singer Brandy has revealed that she is back as Disney royalty and will reprise her trailblazing role as Cinderella. Here’s everything we know so far about the magical sequel The Pocketwatch.

The Pocketwatch will premiere on Disney+.

Disney lovers will probably have to wait a while before they can actually stream and sing along to this mash-up of a new movie. So far, The Pocketwatch has been cast and greenlit, but filming has not even begun. According to Disney’s press release, even the title of the movie is possibly temporary, so a lot can change from now until the film is ready for viewing. But that didn’t stop Brandy from getting her fans excited about reprising her iconic role. In 1997, Brandy became the first Black actress to portray Cinderella alongside co-stars Whitney Houston and Whoopi Goldberg in the groundbreaking musical television movie Rodgers & Hammerstein's Cinderella.

“So excited to join this amazing cast and reprise my role as #Cinderella in the #DisneyDescendants sequel The Pocketwatch. Thank you to my @disney and @disneyplus fam ✨ It’s Still Possible 👑,” Brandy captioned the post.

What will The Pocketwatch be about?

The Pocketwatch takes place in the universe of The Descendants franchise that tells the stories of the young sons and daughters of Disney's most beloved characters and their evil arch nemeses. The plot of the movie musical will follow teenagers Red and Chloe as they become an unexpected duo and use a little time travel to save Auradon using the White Rabbit’s magical pocket watch. The movie sounds like it will have a lot of mama drama as Chloe is Cinderella and Prince Charming’s daughter, and Red’s mom happens to be the very evil Queen of Hearts from Alice in Wonderland.

Brandy isn’t the only singing superstar in the cast.

While Brandy can certainly carry this movie on her own with her amazing pipes, The Pocketwatch is set to have not one, but two pop superstars. British singer Rita Ora is slated to play the villainess in her role as the vicious Queen of Hearts. The tyrannical ruler will lord her power over the kingdom of Wonderland and make all her underlings shake in their petticoats.

Brandy’s Cinderella is an “inspiration for everyone.”

While most little girls can’t get enough of Disney princesses, Cinderella is a movie that created a huge impact on its viewers as well as its star. In an interview with Variety, Brandy shared how much this role matters to her personally and for little girls everywhere looking for wider representation on-screen. “It means everything to me. It put me in a position to be a vessel. To be an inspiration for everyone. Especially girls that look like me that never dreamt they can be a Disney princess. And that is something that I am so proud of.....And I can share that with my daughter.”

More Like This
'Enchanted' To 'Disenchanted': A Look At The Characters Then & Now
Exclusive: 'Firebuds' Dives Into Hanukkah Traditions In Festive New Episode
'The Princess Diaries 3' Is Actually, Really Happening
Surprise Your Kids With This Exclusive Sneak Peek At Mickey Saves Christmas