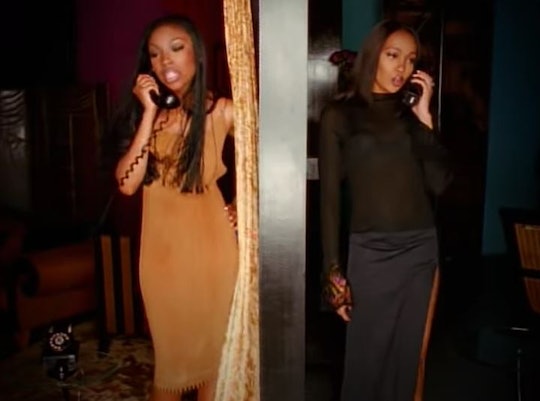 Brandy & Monica Did A Fun Reenactment Of "The Boy Is Mine"

It's been 23 years and it's still a bop for the ages. And lucky for us, Brandy and Monica sang "The Boy Is Mine" once again in a video shared on TikTok and, yes, it's just as amazing as you remember.

The R&B singers recently recreated the intro to their 1998 hit in a video shared on TikTok. "This was fun," the Moesha alum captioned the video she shared on Feb. 18.

In the updated duet, Brandy and Monica lip-synch their parts of the song, with Brandy kicking it off. "Excuse me, can I please talk to you for a minute," the 42-year-old singer mouths, and the intro goes on just as you remember.

It's nice to see the two singers officially on good terms after all these years. The pair were apparently in an epic beef for years over the "Boy Is Mine" single. According to some accounts, Brandy was upset that Monica had named her LP after the single, while the Cinderella star claimed she had the song first and invited Monica to be part of it. Nonetheless, the two seemed to have laid the past to rest. In fact, both gave one another mutual respect in an epic Verzuz battle last September, as Pitchfork reported.

"I really am a straight shooter and I really do admire what you do musically," Monica told Brandy during the live IG performance.

"I just need you to know that I have the utmost love and respect for you," Brandy replied. "No matter the times where it seemed like I didn’t."

Beyond this "The Boy Is Mine" remake, both singers are pretty active on TikTok. When Brandy is not giving us 90s R&B nostalgia vibes, she is giving us Disney ones. Recently she participated in the Cinderella challenge to celebrate the premiere of the Roger & Hammerstein's remake on Disney+. With Moesha on Netflix, who knows what other nostalgia will pop up in our TikTok feeds.