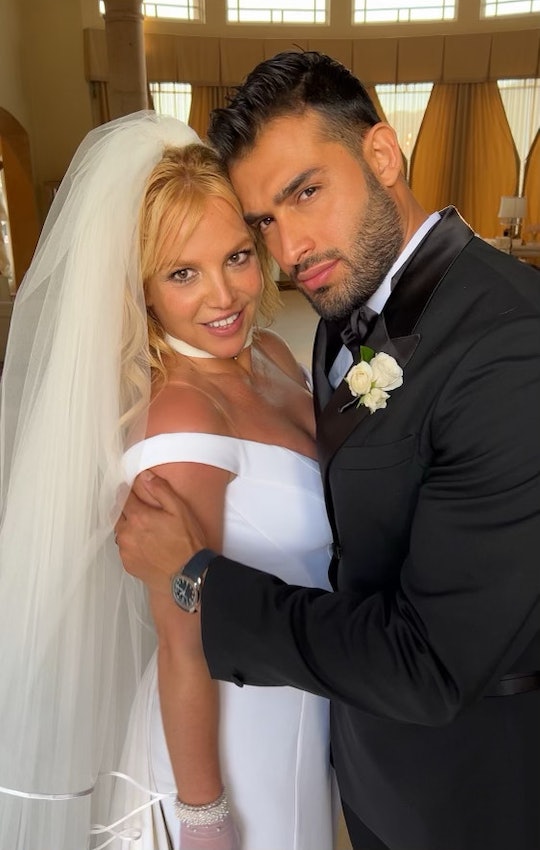 Britney Spears's Sons Didn't Attend Her Wedding, But Are "Happy For Their Mom"

A lawyer for Kevin Federline released a statement.

Britney Spears married her longtime boyfriend Sam Asghari on Thursday. The guest list included loads of her celebrity friends and supporters, but it did not include her two teenage sons from her previous marriage to Kevin Federline. And the reason why they decided not to attend is very thoughtful, if a bit sad.

The “Toxic” singer married Asghari in Los Angeles in an intimate ceremony that included guests like Madonna, Paris Hilton and her husband Carter Reum, Selena Gomez, Donatella Versace, and Drew Barrymore in attendance. Her 16-year-old son Sean Preston and 15-year-old son Jayden, however, were not at the wedding.

Their dad Kevin Federline released a statement via his attorney explaining that, “although the boys will not be in attendance, Kevin and the boys are happy for Britney and wish her and Sam all the best going forward,” per Entertainment Tonight. “They are excited that this will be a positive development for her post-conservatorship life.”

Since the end of her conservatorship last November, Spears has been trying to spend more time with her two teenage sons, a source close to the singer told People, noting that Asghari has been making efforts to bond with the boys as well. And while it’s unfortunate that they did not attend their mom’s wedding, it’s important to remember that they are teenagers who get to make some of their own decisions. “They are 16 and 15 years old and made the choice themselves,” a source close to the boys told Entertainment Tonight. “The wedding is a bit overwhelming for children of their age, and they preferred not to go.”

The singer certainly seemed to love her wedding day, even without her sons in attendance. She walked herself down the aisle to Elvis Presley singing “Can’t Help Falling In Love With You,” per People, and danced all night at her reception with Madonna and others.

Britney reportedly spent nine months planning her big day and she seemed to enjoy every moment of it. She and Madonna even recreated their iconic kiss from the 2003 MTV Video Awards at the reception. Selena Gomez danced the night away in a blue jumpsuit, while Spears wore a total of three wedding gowns. One of which was created by wedding guest Donatella Versace. “Designing Britney and Sam's wedding outfits came naturally to me,” Versace told People. “A tremendous amount of love was poured into every detail. Together with our Atelier, we created a gown and tuxedo that exudes elegance and glamour. They look just perfect together!”

Britney Spears and Sam Asghari certainly did look perfect together.