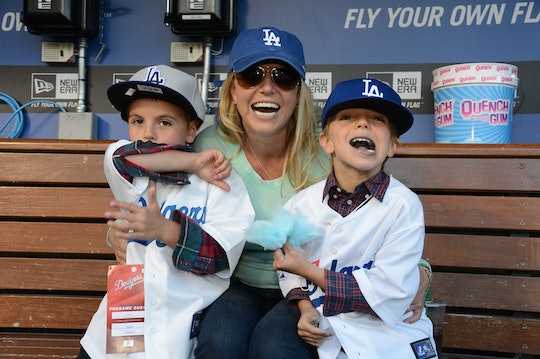 “I was always spraying out and leaking because I was so full of milk.”

Britney Spears is a mom to two bonafide teenage boys now, but she still remembers what it was like to be their personal “milk factory” when she was breastfeeding them. The “Toxic” singer took to Instagram on Monday to reminisce about her early days of parenting, back when 16-year-old son Sean Preston and 15-year-old son Jayden were just wee babies who needed feeding, and the toll it took on her body.

“I breast-fed my two boys like a freaking milk factory,” Spears wrote on Instagram. “I had literally six full bottles pumped out and ready to go at all times beside me as I was breast-feeding because I never wanted my babies to go hungry! I was always spraying out and leaking because I was so full of milk. It kind of hurt my boobs!”

Spears and her ex-husband Kevin Federline welcomed their sons on Sept. 15, 2005 and Sept. 12, 2006, making them just shy of one year apart. How did she handle it? She said she “decided to make a milk factory” in her living room where she had “literally 12 bottles of breast milk at one point.”

Spears explained that she recently held a new baby on a visit to Hawaii and, as so often happens, it got her to thinking about her own boys when they were babies. Spears remembered how strong her back was as a new mom, adding “the strength you can hold is unbelievable when you are a mom.”

The past year has seen a myriad of changes for Spears that has put that strength to the test. She was released from her conservatorship, which was held in part by her father Jamie Spears, after 13 years. She addressed this horrible struggle in her Instagram post when she shared a story about her dad in which she said he sat her down in a chair and telling her, “I’m Britney Spears and I call the shots from now on.” The singer admitted, “ever since that day I felt a huge part of my womanhood stripped from me.”

Now she has taken steps to reclaim her “womanhood.” Spears went to court to speak up for herself last June and shared some of the rights that had allegedly been taken away from her, one of which was a refusal to allow her to have her IUD removed so she could have a baby with Ashghari.

Now it seems the mom of two has babies on the mind, both past and future. Last November, Spears shared a photo of a baby’s feet and wrote, “I'm thinking about having another baby !!! I wonder if this one is a girl ... she's on her toes reaching for something … that's for sure.”

Then again, now that her boys are “so big now,” as she wrote in an Instagram post last September, it is natural to look back and remember when they were just little babies and she was their “milk factory.”