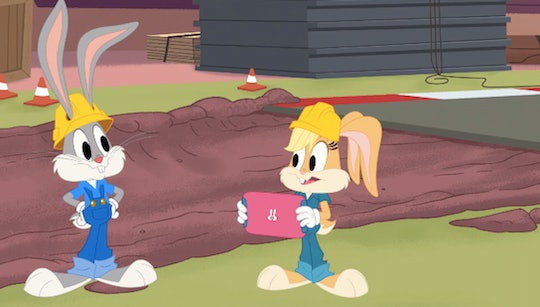 Bugs Bunny and his cartoon crew are back, and this time they’re bringing along fan-favorite Lola Bunny for a show that your truck-loving preschooler will love. HBO Max and the Cartoon Network are gearing up to debut the highly-anticipated Bugs Bunny Builders, Looney Tunes’ first-ever educational show and first preschool show in over 20 years. In this re-imagined version, Lola stands right alongside Bugs as co-leader of the Looney Builders to assist with Looney building projects. Ahead of its premiere, Romper has an exclusive sneak peek that’s sure to please every bunny.

In Romper’s exclusive clip from the Bugs Bunny Builders’ episode “Racetrack Race,” a construction hat-clad Tweety is busy on his feather-matching excavator, when a lisping Daffy suggests some “super fun” plans to build a race track that isn’t quite part of the building blueprint (but will make all of his duck’s racing dreams come true). Lola hops on the scene as a fellow supervisor with her pal Bugs, and she’s one tech-savvy rabbit too (with some pretty cute blonde swooping bangs to boot). Lola inhabits the frame like the Boss Bunny that she is, using her hand-held tablet to get the crew back on track — literally and figuratively.

It’s pretty awesome to see a female character join the Bugs Bunny team to defy gender stereotypes and clearly take charge as the head problem-solver for her animated friends. The scene demonstrates a nice balance of technology and collaboration, teaching impressionable preschoolers that compromise is always a welcome option, and when you work as a team, you can come up with even better ideas. Voice actor Chandi Parekh has been cast as Lola, and she will join a handful of actors who have played the the iconic rabbit role that first made its debut in the original Space Jam movie. Since then, Kristin Wiig and Zendaya have also had the honors of playing this famously furry character.

This brand new Bugs Bunny show isn’t just about souped-up vehicles and super-looney tools for super-looney projects (although there will be a huge ice cream sundae to look forward to!), it’s about design, resilience, and teamwork. Bugs Bunny Builders is also sure to tap into parents’ nostalgia for the OG cartoon characters of their cereal-chugging childhoods, while ushering new audiences into a modern age with equal opportunities for all builders (and hopefully no gender pay gap).

More Like This
Exclusive: CoComelon Is Going On A Live Tour Across the U.S.
Take An Exclusive Sneak Peek At 'Bluey' Season 3 Before It Lands On Disney+
Watch Jack Black & Rita Ora Bring Their Kung Fu Panda Characters To Life
A Guide To Every Dog Breed In 'Bluey'