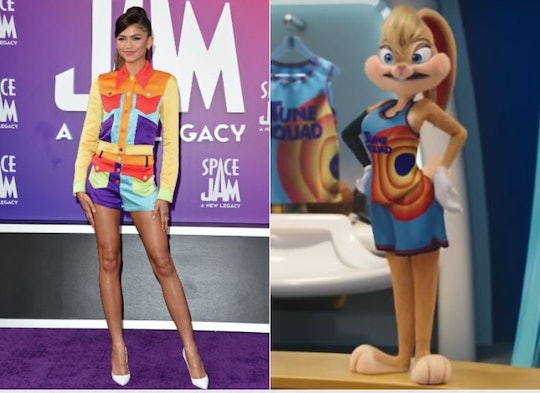 “I understand, because she's a lovable character.”

The long-awaited and much-anticipated Space Jam sequel is finally out! Like MJ before him, Lebron James will join the hilarious and famous Toon Squad. As fans will notice, a few things look different in Space Jam: A New Legacy, including Lola Bunny’s look. The change sparked a bit of controversy, which caught Zendaya, who portrays the character in the sequel, off guard.

The Spiderman actress, who plays Zola Bunny in Space Jam: A New Legacy, shared with Entertainment Weekly that she didn’t know her character’s new appearance would cause such outrage. “I definitely know we love her, but I didn't know it was going to be as much of a focus as it was,” Zendaya told Entertainment Weekly in ahead of the movie’s premiere this week. “But I understand, because she's a lovable character. She's very important, so I get it.”

In the original 1996 movie, Lola was the cropped top, perky female bunny that had Bugs Bunny shooting heart eyes. According to Newsweek, animator Tony Cervone admitted at the time that the team “kind of pumped her up more in the feminine attributes department.”

Fast forward 25 years later and the sequel’s director, Malcolm Lee, decided to take a different direction in 2021. In a March interview with Entertainment Weekly, Lee said it was “important to reflect the authenticity of strong, capable female characters.” As a result, the character was desexualized and given a more flat-chested, rabbit-like figure.

“I had no idea that people would be that up in arms about a bunny not having boobs,” Lee added in the same interview. “... I understand people don't want things to change, but I think we needed some evolution with her, not by objectifying her but by making her strong and still feminine. And, yes, we had all these other women who were like, 'Oh, you can't be strong and have big boobs?!' Sure you can, but we're talking about a cartoon bunny not women!”

Nonetheless, the 24-year-old actress said she understands the backlash because Lola Bunny holds a special place for many ‘90s kids’ childhoods. “She's special to a lot of people and their childhoods and they've been able to grow up with her,” she told Entrainment Weekly this week, “so I get that sense of protection.”

Lola’s look isn’t the only change Space Jam fans will notice in the sequel; as Deadline reported in March, Pepe Le Pew’s character was cut from the new movie after the character was criticized for adding “to rape culture.”

Even with all the changes, reviews for Space Jam: A New Legacy have been mixed, but generally positive. Emily Clark for Plugged In, for instance, wrote that it’s “a fun, mostly family-friendly film.”

Space Jam: A New Legacy is available now in theaters and HBO Max.