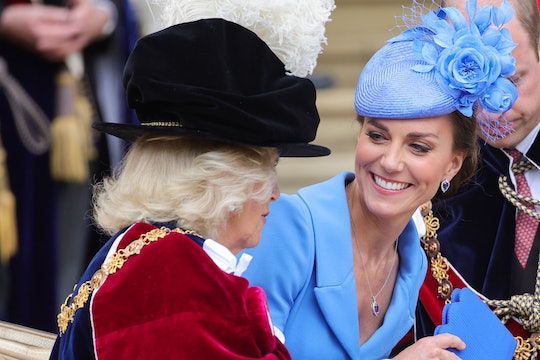 When the Duchess of Cornwall needed to have her photo taken for the cover of Country Life magazine, she had one request. She wanted to choose her own photographer. And of course she chose her daughter-in-law Kate Middleton, who has become the de facto photographer for the entire royal family. And with good reason.

Camilla Parker-Bowles graced the cover of Country Life magazine in celebration of her own 75th birthday, which falls on July 17, as well as the magazine’s 125th anniversary. She was asked by editor Mark Hedges if she had any input into what she would like, and he told The Telegraph that one thought sprang to her mind immediately. “‘Oh I'd quite like Catherine to do it,’” Parker-Bowles said, according to Hedges. “I spent the next three or four minutes desperately racking my brains trying to think of a professional photographer called Catherine. Then suddenly I grasped what she meant — one of the most amazing things that could happen. I found it one of the easier things to nod my head at.”

Parker-Bowles, who has been married to Middleton’s father-in-law Prince Charles for 17 years, shared the final images from her photo shoot on her royal Instagram page and they are indeed fantastic. She was photographed in the garden of her home in Wiltshire, Ryamill wearing a floral dress and a light blue cardigan. She sits on a bench beside a basket of flowers, and it seems there must also be a walking through the garden action shot because a behind-the-scenes photo of Middleton hard at work sees Parker-Bowles standing.

The Duchess of Cambridge has long been the photographer of choice for her three children, 8-year-old Prince George, 7-year-old Princess Charlotte, and 4-year-old Prince Louis, taking their birthday photos and first day of school pics as well. And she’s certainly branched out to the rest of the royal family; when Prince Charles turned 70, he shared a beautiful photo of him hugging his little pal, grandson Prince Louis, that totally captured their loving relationship.

Middleton must have been overjoyed at the prospect of having a willing subject as a photographer, since she admitted in 2021 that her kids get tired of her wanting to take their photo all the time. Not so with her mother-in-law.

The two future queens looked like they were having a great time together. Now if only the rest of us could hire Kate Middleton to be our family photographer.