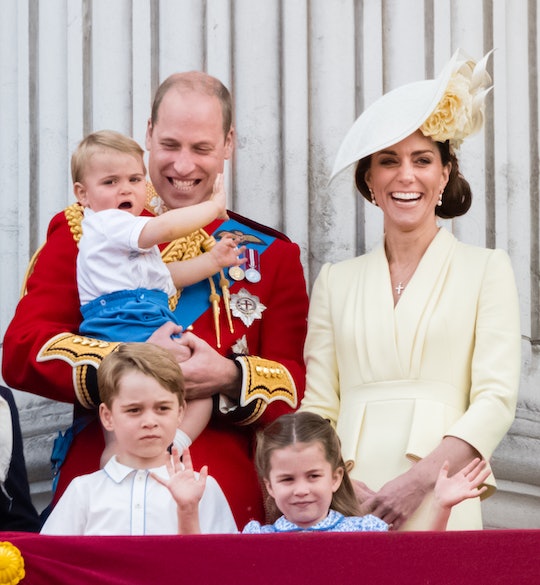 Royal fans can probably spot a photo taken by Kate Middleton a mile away. Especially the photos of her kids. She’s an incredibly talented photographer, particularly when it comes to getting candid shots of her three kids, 7-year-old Prince George, 6-year-old Princess Charlotte, and 3-year-old Prince Louis. Whether they’re laying in the grass giggling as Prince George did for his seventh birthday, or wrestling with dad Prince William as happened for his birthday in 2020, the Duchess of Cambridge always captures their personalities. It’s a real gift, even if it’s not a gift her kids appreciate. Like, at all.

During a recent chat with fellow mom and photographer Ceri Edwards for Hold Still, Middleton’s national contest to capture the effect of the COVID-19 lockdown across the United Kingdom with the National Portrait Gallery, the mom of three admitted that her kids get tired of having their picture taken. “It’s like me. Everyone's like, 'Mummy, please stop taking photographs,’” Middleton said.

I mean, she’s the royal patron of the National Portrait Gallery, for pete’s sake, what does she have to do to impress those kids?

Fortunately Middleton’s skills as a photographer extend beyond her children to the rest of the royal family. She took a beautiful portrait of Queen Elizabeth and Prince Philip with their great-grandchildren, for instance, as well as a sweet photo of little Prince George out for a carriage ride with the Duke of Edinburgh, both of which the couple shared in tribute when he died in April.

Whether her kids like getting their photo taken or not, Middleton will likely keep on documenting their lives regardless. Royal photographer Samir Hussein called Middleton “a really keen photographer” in April 2020. “You can see from the pictures she takes that she’s better, certainly better than your average person on the streets,” Hussein told Us Weekly. “She’s got a good eye, and she’s a good photographer. I’m impressed by her pictures, absolutely.”

And let’s be real here, she also has some pretty great subjects in her three children. Particularly Princess Charlotte, who is apparently a “real character” according to Hussein, although Prince Louis’ “Instagram vs. Reality” second birthday photo shoot with his mom was pretty hilarious too. How can Middleton’s kids expect her to resist the urge to photograph them when they are just so darn adorable?

More Like This
Prince Charles Got All Mushy When He Met Lilibet For The First Time
You’ve Probably Been Pronouncing “Lilibet” All Wrong
10 Ways Prince George & Prince Louis Are So Different From Each Other
Meghan Markle Calls On Men "To Be Vocal" In The Aftermath Of Roe v. Wade Ending