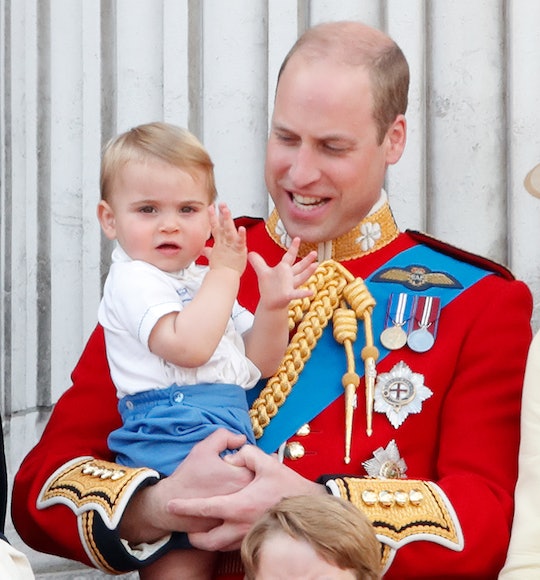 In honor of Kate Middleton and Prince William's youngest turning one year older, Kensington Palace shared new photos of Prince Louis painting rainbows and getting his little royal hands dirty. And the best part? The Duke and Duchess of Cambridge decided to post an "Instagram vs. Reality" moment for their son's second birthday, giving us a sweet behind-the-scenes look at Prince Louis' personality.

The Duke and Duchess of Cambridge celebrated Prince Louis' second birthday on Thursday, April 23 at their country home of Anmer Hall in Norfolk County, along with their two older children, 6-year-old Prince George and 4-year-old Princess Charlotte, of course. And it looks like the family decided to get a little crafty for Prince Louis' birthday celebrations, judging from his official photos, taken by his talented photographer mom.

In the series of photos shared on Instagram, Prince Louis is smiling and having a blast with rainbow-colored paint all over his hands. "Sharing a sneak peek of Prince Louis’ handiwork ahead of his second birthday!" the proud parents captioned a post.

Being an amazing photographer, Middleton managed to capture the pride and excitement on Prince Louis' face when he showed off his rainbow-tinted hands. Not to mention her little boy's exuberant personality in general... Prince Louis always looks like the life of the party. Especially his own birthday party.

Prince Louis looks like he's having the time of his life outside doing some finger painting, especially with his mom standing close by to capture all of the action.

While Middleton has frequently chosen outdoor, casual pictures of her kids to share in honor of their birthdays, some of this year's official photos of Prince Louis offered a royal first: an actual "Instagram vs. Reality" moment, where she compared one artistic photo of Prince Louis holding up his hands politely with a more realistic photo — one where he had smeared the rainbow paint all over his face. He might be messy, but no one is having more fun than Prince Louis in that photo.

Both Prince William and Middleton have previously spoken about Prince Louis' toddler tendencies in recent months. For instance, Prince William told the BBC in a recent interview that Prince Louis has been hanging up on video calls with the rest of the royal family because "he wants to press the red button." And back in January, Middleton admitted that Prince Louis had become a very busy toddler, practicing his balancing skills. He's also clearly busy practicing his painting skills.