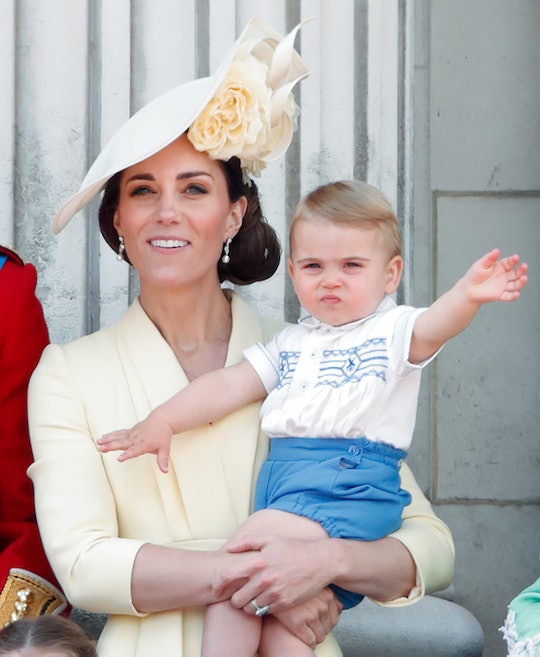 Brace yourselves everyone, Prince Louis is now fully 21 months old. The people who perhaps have to brace themselves the most for this shocking news are his parents, the Duke and Duchess of Cambridge, because it seems their baby boy is becoming a very mobile toddler. In fact, according to Kate Middleton, her youngest son Prince Louis is getting busier every day. Not to mention more vocal.

The Duke and Duchess of Cambridge were in the British town of Bradford on Wednesday and stopped in to visit Bradford’s Khidmat Center to show their support for the "Older Yet Wiser" workshop, which helps grandparents learn how to care for their grandchildren under the age of 4. One of the couples on hand who had graduated from the program were Jo and Ian Broadbent, according to Hello! Magazine, who are busy raising their 6-year-old granddaughter. Jo Broadbent told the magazine that the subject of Middleton's three children came up and the proud mother shared an update about her youngest child.

"I asked how her children were. Kate said Louis had started to tell her 'Mummy, I'm balancing' and she said it was really nice to see him turning into a little boy from being a baby," she told Hello! Magazine of their conversation. "She's obviously very proud of her children."

As Kid Sense Child Development notes, balance is one of the integral skills little ones need to learn to establish proper coordination as they grow, so Prince Louis is pretty smart to be so proud of himself.

It seems the younger brother of 6-year-old Prince George and 4-year-old Princess Charlotte is leaping through milestones in recent months. For example, his mother reported during a December visit to a Christmas tree farm with schoolchildren that Prince Louis is talking and following her everywhere, according to Entertainment Tonight, and even has pretty sophisticated taste in vegetables. Middleton told Great British Bake-Off's Mary Berry during their shared Christmas special A Berry Royal Christmas that her youngest son is a big fan of beetroot, according to The Daily Express.

It looks like the Cambridge family might be well and truly done with the baby years now that Prince Louis is about to turn 2 years old in April. Middleton also said at the same event in Bradford that she doesn't think her husband Prince William "wants any more kids," as Elle reported.

Fortunately toddlers are also very cute, so royal fans have several years of getting Prince Louis updates and occasional glimpses to satisfy them. After all, Prince George and Princess Charlotte are also incredibly adorable.