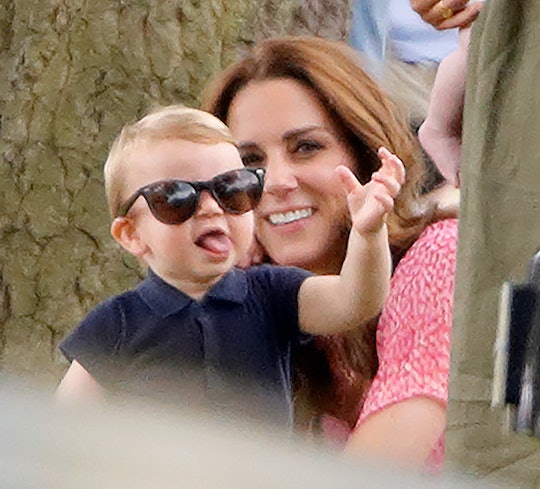 Kate Middleton is a mom of three kids ages 6 and under. Yes, she is the future Queen of England and has staff who help and lives in a palace and all of that. But she's still a mom trying to raise three young kids and is in many ways living the same hectic, exhausting, joy-filled life so many of us recognize. Especially now that her youngest, Prince Louis, is getting bigger... and chattier. Recently, Middleton revealed that Prince Louis is talking and following her everywhere, and this should make moms everywhere feel seen.

Middleton and her husband Prince William are proud parents to 6-year-old son Prince George, 4-year-old daughter Princess Charlotte, and 1-year-old son Prince Louis. And on Wednesday, Dec. 4, Prince Louis was top of mind for his mom when she visited Peterley Manor Farm with school kids to help them choose Christmas trees for their classrooms. One child in particular had her thinking of her youngest when he reportedly reached out to clasp her hand and was heard shouting "Me! Me!" As People reported, Middleton touched the little boy's cheek and told him, "You remind me of my little Louis. He keeps saying 'me, me, me.' And he wants to come with me everywhere!" That sounds just about right to parents of toddlers, I think.

Prince Louis was born on April 23, 2018, and while he hasn't been seen out in public a whole lot, it's true that the few times he has been out he has shown plenty of spunky personality. For instance, when he joined the rest of the royal family at Buckingham Palace for the Trooping The Colour this past summer, he made it very clear he was having the time of his life. Clapping his hands and laughing and clearly keeping both of his parents entertained to say the very least.

Now that Prince Louis is talking and wanting to follow his mom around, I think she can expect life to get considerably busier. Sure, Prince George and Princess Charlotte are going to school every day at Thomas's Battersea School in London, which should free up a little time for the Duchess of Cambridge. But an 18-month-old child who is learning to find his own voice can take up more time than anyone would believe possible. Especially when they want to follow their parent around everywhere, even a home as big as Kensington Palace.

More Like This
10 Ways Prince George & Prince Louis Are So Different From Each Other
The Heartfelt Details You Didn't Notice In Kate Middleton & Prince William's Portrait
You’ve Probably Been Pronouncing “Lilibet” All Wrong
Catherine Reitman Calls It Like She Sees It: “Being A Working Mother Is Impossible”