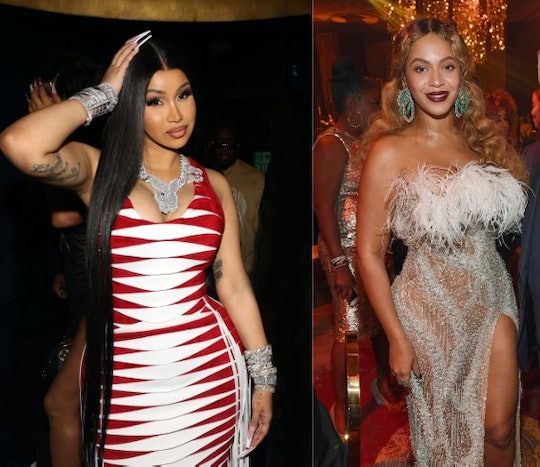 “I’m gonna put it in a glass frame with laser beams on it.”

Beyoncé sent her love and appreciation to Cardi B. On Monday, the “I Like It” artist was gifted with a vinyl copy of Bey’s Renaissance album as well as a handwritten note from Queen Bey herself. And like most of us would do, Cardi plans to protect it all costs.

“Look what Beyoncé sent me, read it b****h,” Cardi captioned a video of herself holding up her gifts on Twitter. “It’s so beautiful, so lovely.”

“To: Cardi B. Hard working, beautiful and talented queen, thank you for always supporting me,” the note from Bey read. “Sending so much love to you and yours. Respect, Beyoncé.”

Cardi jokingly dished her plans on how she intends to protect her vinyl. “I’m gonna put it in a glass frame with laser beams on it. Anybody who gets mother-f*cking next to it is gonna get electrocuted on mother-f*cking sight. And I just wanna say thank you so much, I feel so special.” She concluded the video by singing a few lines from the Renaissance song, “Plastic Off the Sofa.”

The appreciation and love are mutual between both women. When Beyoncé first released her single, “Break My Soul,” from the album, Cardi went on Instagram Live rapping over the beat. Beyoncé later used her clip in a TikTok compilation video promoting the song.

In a 2018 interview with GQ, Cardi admitted that Bey was one of the few celebrities that she still gets shy around. “When I met Beyoncé, people be like, ‘How that felt? I bet you was mad happy,” she said, recalling the moment they met. “It’s like, ‘Actually, I wanted to sh*t on myself.’ It was a very scary thing.”

Beyoncé has been in a gift-giving mood recently. Last week, she gifted Sheryl Lee Ralph a beautiful floral arrangement to congratulate her on her first Emmy win. No matter the occasion, Bey’s gifts always impress. And it was especially timely for Cardi and her husband, Offset, who celebrated their fifth wedding anniversary on Sept. 19. Cardi serenaded her husband to “Plastic Off The Sofa” in an Instagram video. “Oh, we don’t need the world’s acceptance, they too hard on me,” she sang while caressing his face. “They’re too hard on you, boy. I’ll always be your secret weapon in your arsenal, your arsenal.”

The Beyhive may be fierce, but Cardi may be Bey’s biggest fan.

More Like This
Abbott Elementary's Sheryl Lee Ralph Received A Beautiful Gift From Beyoncé
Gabrielle Union Admits She May Be Becoming A Bit Of A Dance Mom With 3-Year-Old Kaavia
Rihanna's First Post Since Giving Birth Confirmed She's Performing At The Super Bowl
Zaya Wade Is Rocking New Long Hair & As Gabrielle Union Put It, She's A "Vision"