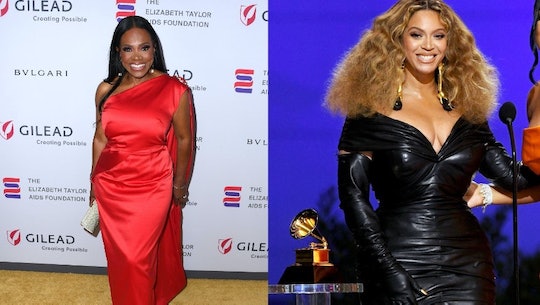 Beyoncé sent her love and congratulations to the original Dreamgirl, Sheryl Lee Ralph. Over the weekend, the Emmy-winning Abbott Elementary actress received a beautiful bouquet of flowers from the “Break My Soul” megastar to celebrate her historic Emmy win.

In a video posted by Ralph’s son, Etienne Maurice, which he shared on his TikTok and Twitter, the 65-year-old star opened the card and appeared shocked and nearly in tears to find out who the recipient was. “To the original Dreamgirl, sending you a beautiful congratulations,” the card reads. “All my love, Beyoncé.”

“Oh Beyoncé, wonderful,” Ralph lovingly responded in the video. “I don’t have a voice but it's wonderful, oh my God.”

In another video, Maurice captured the moment another flower arrangement from Oprah Winfrey arrived. “at this point i’m just my mothers documentarian,” he captioned the Sept. 15 video.

Maurice, who goes by the Twitter name “Your Friend’s Friend,” is always up to show up and out for his mother and celebrating her many accomplishments. As one fan tweeted, “I love how @walkgoodetienne is sharing with all of us the love that his mother (the wonderful) @thesherylralph is receiving right now. Like it’s so amazing. She has been phenomenal for so many years, but for her to finally receive that Emmy the other night. Man so amazing.”

Ralph won an Emmy for Best Supporting Actress in a Comedy Series for her role in Abbott Elementary, making her the second Black woman to ever do so. She’s also a Tony-award-winning actress for her role as Deena Jones in the 1981 Broadway musical Dreamgirls. Beyoncé reprised the role in the 2006 movie, alongside Jennifer Hudson and Anika Noni Rose.

“To anyone who has ever, ever had a dream, and thought your dream wasn’t, wouldn’t, couldn’t come true, I am here to tell you this is what believing looks like. This is what striving looks like and don’t you ever, ever give up on you,” Ralph said during her acceptance speech, after belting out the lyrics of Dianne Reeves’ “Endangered Species.”

Teen artist Tyler Gordon also honored Ralph’s historic Emmy win with a painting. “This is what DREAMING looks like!,” he captioned his Twitter video of him painting a portrait of the Emmy-winning, Tony-winning actress. “Congratulations @thesherylralph on your first Emmy win! You’ve shown us all exactly why we have to believe in ourselves, here are your flowers.”