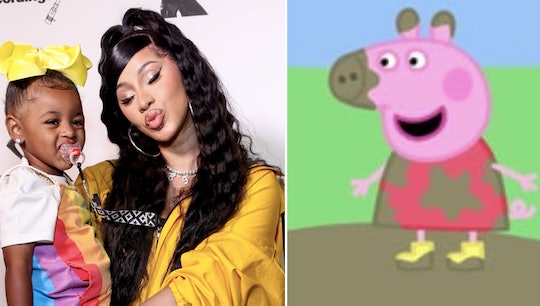 All that puddle stomping is apparently messing up her toddler's Uggs.

She might have been Billboard's Woman Of The Year for 2020 after releasing one of the biggest songs of the year, but she is still a parent. And just like the rest of us, she still must suffer through the same daily grid of parenting. In fact, I know she does. On Monday, Cardi B penned a tweet about Peppa Pig that might seem all blustery and threatening, but the reality is that, like the rest of us, she now lives in service to a toddler's whims. Whether those whims mess up her Uggs or not.

The "WAP" singer is mom to 2-year-old daughter Kulture Kiari with husband Offset. In a recent interview with Billboard, the proud mom talked about how her little girl is already something of a "sassy" kid who understands the type of person who is raising her. "She knows what type of person I am, and when she gets older, clearly she’s gonna hear me expressing myself because we live in the same damn house," Cardi told the news outlet. "I just want her to know: I might be a little crazy, but I have a good heart and I love her. I want her to be confident always. Don’t let one comment break you and make you feel like you’re not that girl. You that girl."

Kulture is also "that" girl who has embraced a certain pig named Peppa. And her mom is... not thrilled. As she wrote on Twitter:

Cardi B is not a fan of Peppa Pig.

The rapper wrote that her daughter has been stomping in wet puddles since she started watching Peppa Pig, and it "gets me so tight!" Especially since all of that puddle stomping has been messing with her daughter's Uggs. She ended her rant with a threat to Peppa herself to "count your f**kin days!"

Cardi B might seem a bit more heated than most parents when it comes to Peppa's influence over her daughter, but she is certainly not alone. Peppa Pig's popularity has been a phenomenon for the past four years or so, to the point where American kids have famously begun speaking with British accents in a nod to the little pig from the U.K. Some parents even took to Cardi B's tweet to share their own frustration with their kids' obsession with Peppa, writing "I’m ready for the cardi vs peppa diss tracks," and giving the mom a heads up that it could be worse, "Wait till she starts saying tomato wrong and asking to go on a “holiday” ugh."

Parents coming together to support Cardi B's struggle with Peppa Pig. It's kind of beautiful isn't it?