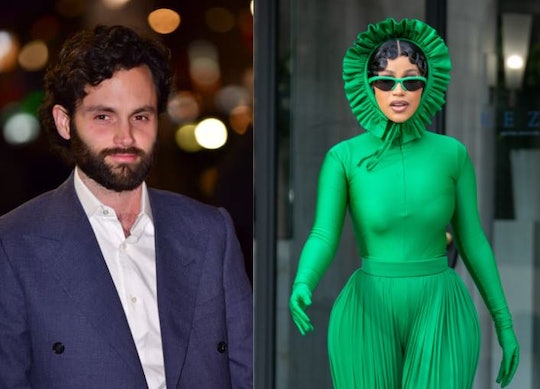 Sounds like fans are ready for the “Up” rapper to be Joe’s latest victim/love interest!

It seems You fans would love to see Cardi B become Joe Goldberg’s latest obsession. A petition is currently active for the “Up” rapper to appear on the show’s fourth season and it sure seems like Netflix is on board to make it happen.

The petition on Change.org touched on Cardi and Penn Badgely’s recent Twitter interaction that left Ms. Bodak Yellow speechless when the Gossip Girl alum knew who she was. Now fans are yearning to see more.

“Twitter and fans of the two have gone up in a frenzy and are now pitching that Cardi B should be on the fourth season of the show,” the petition read. As of Thursday, the petition has just under 1,000 signatures. A thousand signatures are needed for it to be featured in Change’s recommendations.

Cardi, who is a fan of Badgley and of the Netflix thriller, seems down for the idea. She even pitched her own idea on how she could be included in the series. “So it’s episode 1 and I’m at Paris Fashion week shutting it down! I turn around and there stands YOU Ok finish it off @netflix,” she tweeted on Oct. 21. The “I Like It” mommy of two has even changed her Twitter profile picture to Badgley.

During a recent appearance on Jimmy Kimmel Live! on Monday, host Jimmy Kimmel asked Badgley if there’s a possibility Cardi will be one of Joe’s obsessive love interests in the upcoming season. “Well, I don't know,” the You star said during his appearance on Monday. “I mean, I definitely can't say, but there is actually, I believe, this is true.” He then added that he was aware of the Change.org petition and said, “I actually don’t know. I’m not being coy.”

The first three seasons of You are currently airing on Netflix. On Oct. 13, the show was renewed for Season 4, which is set to premiere near the end of 2022. “We're deeply grateful that Netflix has shown You such monumental support and that people around the world have enjoyed watching Joe really get it all very wrong over the past 3 seasons,” showrunner Sera Gamble said in a statement to Deadline. “The whole You team is excited to explore new, dark facets of love in season 4.”

And who knows! Maybe they will consider Cardi’s pitch.

More Like This
Nick Cannon Gives In To Chaos In A Cute New TikTok With His Oldest Kids
Exclusive: Watch How A Group Of Princesses Save The Day In Netflix's New Animated Series
The Best Dressed Parents At The 2023 Grammy Awards
Beyoncé’s Kids Got A Sweet Shout-Out As She Made History At The Grammys
What Parents Are Talking About — Delivered Straight To Your Inbox