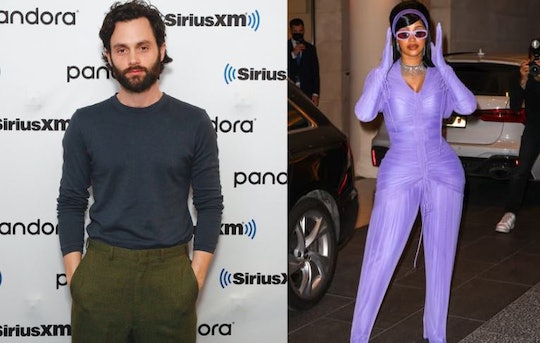 Fun fact: Penn Badgley is crazy about Cardi B! And it looks like she’s also a huge fan of the star of Netflix’s hit thriller You, as an incredible Twitter exchange between the two suggests.

Badgley, who plays Joe Goldberg in You, previously expressed his admiration of the “Up” rapper during a panel with Shay Mitchell, one of his co-stars from Season 1. While the video is a few years old, it’s recently gone viral on Twitter. In the video, Badgley said that he admired Cardi’s unbothered, second-nature relationship with social media and said it’s a quality he wished his character had. “She has such an authentic relationship with social media,” Badgley said in the video, “and despite what many might judge as antics, I think she has an incredibly authentic relationship to that, and that's why people like her so much.”

The resurfaced video caught the attention Ms. “Bodak Yellow” herself and her reaction was a priceless one. “OOOOMMFFFGGGGGG HE KNOWS ME!!!,” she wrote in a retweet of the video on Oct. 16 with screaming face emojis. “OMMMGGGG!!!!!! Yoooo like I’m famous famous,” she added.

The response left the 34-year-old actor, well, speechless. “I —,” he retweeted her response three days later.

Season 3 of You is currently airing now on Netflix. Based on the novel by Caroline Kepnes, the new installment follows Joe as a father and husband to his jealous, homicidal wife, Love, played by Victoria Pedretti. And of course, Joe being Joe, finds a new love interest/stalker victim to become obsessed. And the same week Season 3 premiered, Netflix announced the series was already renewed for a fourth season.

It’s safe to say Cardi could be a fan of the show, based on her reaction. Or Gossip Girl! Whatever brought these two together, this could be the start of a new friendship! Who knows, they could even get together for a playdate with their little ones?