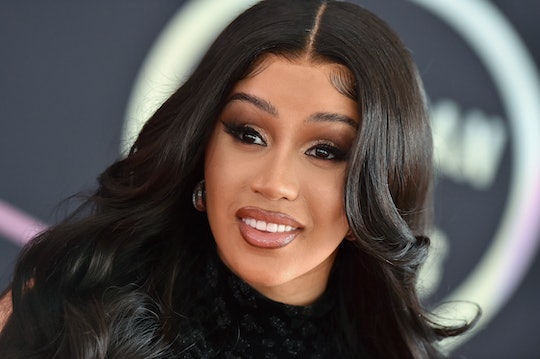 Is this a pandemic baby superpower?

Cardi B and Offset’s 3-month-old son has reached a new milestone! On Monday, the rapper shared an adorable update on Twitter about her infant and revealed he’s got this whole baby bottle thing under control these days.

“My son holding his bottle wit both his hands already,” Cardi tweeted with the teary-eyed emoji on Dec. 6. “Im trying to remember if KK,” referring to their daughter, Kulture Kiari, “was doing that around 3 months old or if this is one of the super powers these pandemic babies coming with.”

While every baby is different, Cardi’s little boy might have a little super power or some super strong baby arms. According to Healthline, the average age babies can hold their own bottle is usually around 8 or 9 months ago, but it can happen before 6 months of age as well.

The “Wild Side” rapper gave birth to her baby boy back in September. The couple still has not shared his name yet, but fans have been having fun trying to guess what it is. Name guesses have included Azul and Karma. And the baby doesn’t make a lot of cameos on his parents’ social media. Offset did, however, share a very cute father-son mirror picture on his Twitter back in November, holding his little boy in a white onesie.

While fans wait to hear more about Cardi’s son, his big sister Kulture continues to build her fanbase. In fact, her Instagram page has over 2.3 million followers.

And like all moms, the “Bodak Yellow” rapper has her hands full these days. “It is a little — it's a lot,” Cardi told Good Morning America about parenting both kids in an interview back in November. “I just have to divide my time with both, because my daughter, she gets a little bit territorial sometimes — I love it — it's a lot of the happiness in my soul."

As for Offset, Cardi said her husband was a “hands-on” dad. “He is definitely hands-on,” she told Good Morning America. “Sometimes he just gets too hands on, I be like, Listen, I got it.”