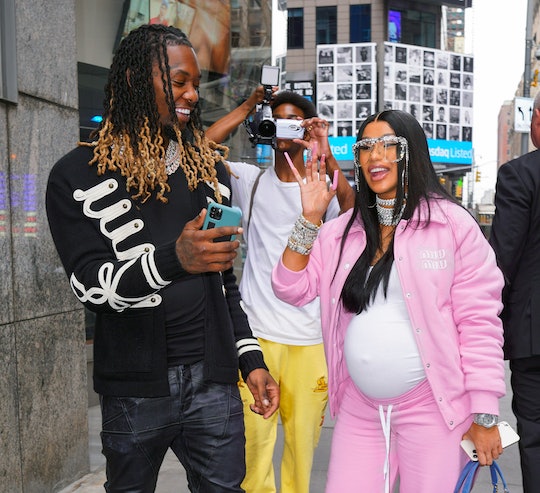 The hip hop couple’s newest addition makes them a family of four now.

Cardi B is officially a mom of two. The “I Like It” rapper gave birth to a baby boy on Sept. 4 and announced the happy news a few days later with a photo of her cradling her new baby boy in the hospital bed with her husband Offset beside her.

"9/4/21," Cardi B captioned the photo of her family who were all cozy underneath a Louis Vuitton blanket. She also added a blue heart emoji and dinosaur emoji.

In a statement shared with Billboard, the couple said they were “overjoyed” to meet their son. “He is already loved so much by family and friends and we can't wait to introduce him to his other siblings,” the couple said through a representative.

The baby boy will join his older sister, Kulture, 3, whom the couple also shares together. Offset is also father to sons Kody, 6, and Jordan, 11, and daughter Kalea, 6, from previous relationships.

Cardi announced her pregnancy back in June while appearing in a joint performance with her husband at the BET Awards. Back in July, during an interview on the live radio app Stationhead, the 28-year-old “Up” rapper shared how she told Offset about baby number two. Instead of a big reveal, she revealed that she just told him after she started to show pregnancy symptoms. “I think I'm pregnant, bro,” she recalled telling him. After that, the couple took a test and lo and behold she was. “We just started laughing like, 'Lord, we have so much to do,’” she added.

While she’s busier than ever, Cardi has previously expressed a desire to have more children. “I want to have more kids,” Cardi said during a 2019 interview with Entertainment Tonight. “Whatever my body can take, and I feel like I can take it. It’s so easy for people to be like, ‘Oh, I want four or five kids.’ But it’s like, ‘Can you really take that?’”

Fast forward two years later and the new mom said a new phase of life is starting with her baby boy. “There is something so dear about this pregnancy,” she said during the Stationhead interview in July, “and I feel like I'm starting a new chapter, and I'm happy about that.”

More Like This
Alec & Hilaria Baldwin Welcome Baby #7, And Revealed Her Cheerful Name
Nick Cannon Announced The Birth Of His 9th Child, A Daughter Named Onyx
Gabrielle Union Admits She May Be Becoming A Bit Of A Dance Mom With 3-Year-Old Kaavia
Cardi B Issued A Hilarious Warning For Anyone Who Tries To Touch Her Gift From Beyoncé