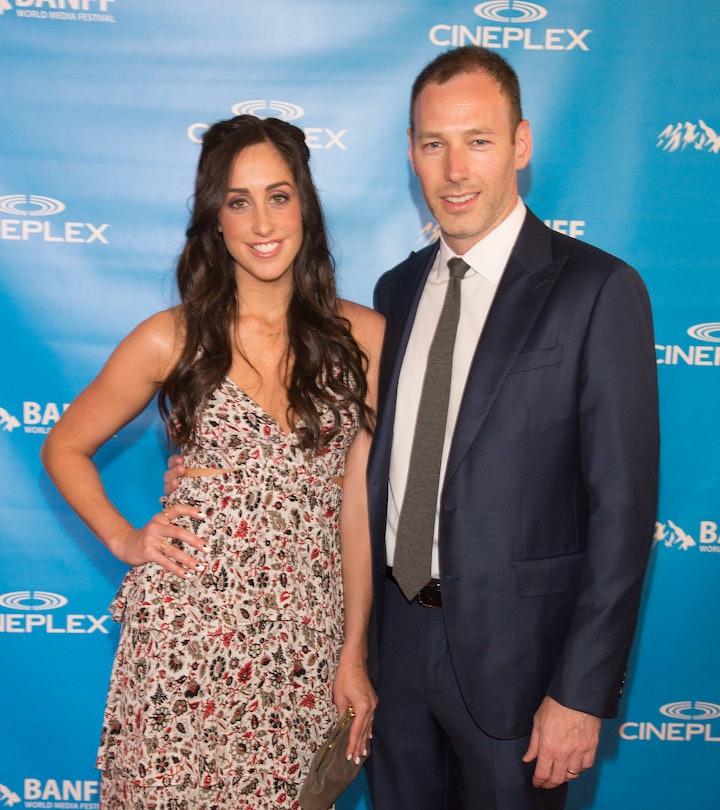 She takes her work husband home with her.

As fans prepare to say a long, sad goodbye to the cast of Workin’ Moms after its seventh season airs on Netflix, it is of course important to remember that the creator of the beloved series is a working mom herself. A woman who first came up with the idea for the series in her early days of motherhood when she was struggling to find her footing. And now here she is, Catherine Reitman, living everyone’s best life with her husband and kids. We might not be able to predict what will happen in the series finale of Workin’ Moms, but at least we know she’ll be walking away with her own happy ending.

Kate and Nathan are really Catherine and Phillip.

Kate Foster and her husband Nathan have been through their share of troubles on Workin’ Moms, but their natural chemistry always seems to shine through for them. Perhaps because Catherine Reitman (Kate) is actually married to Phillip Sternberg (Nathan). Reitman, who is daughter to the late Ghostbusters director Ivan Reitman, opened up about working with her real-life husband in an interview with TODAY.

“Look, it’s taken a lot of work and patience to create a working dynamic together where we know how to do that on set, and then turn it off and parent together at home,” she explained. “And I’m one of the lucky ones, I get to look across the set and my best friend, my husband, is rooting for me in each scene.”

Reitman and Sternberg have been married since August 2008, and she shared a heartfelt appreciation post for her husband on Instagram to celebrate 14 years of marriage reading.

“Happy anniversary to this absolute thirst trap,” she captioned a series of photos posted on Instagram on Aug. 31. “Oh does this man trap. 14 years ago I signed on to a life with this dude, completely unaware of how lucky I would be. From producing my YouTube show to elevating the tv show that changed our lives forever. He has never phoned it in once. Oh and then kids. We made those too. And Philip is the definition of a 50/50 parent. The man throws down in every aspect of our lives. Big love to my wolf.”

Reitman became a mom in 2013 with the birth of her oldest son Jackson, who was most recently featured making fart sounds with a balloon while his mother was being interviewed via Zoom by Today’s Parent in 2021. So I think we know who he gets his sense of humor from.

She suffered from postpartum depression with her first child.

One of the most common themes of the first season of Workin’ Moms is postpartum depression, a subject Reitman knows all too well from her own experience as a first-time mom. “I was not connected to my first child. I wasn’t naturally maternal,” she said in 2021 during an appearance on the Betches Moms podcast. “I didn’t like the way the world was looking at me because I had all these personal questions in my head, like ‘Am I still smart? Am I still interesting? Am I still sexy? Am I still worthy of attention outside of the child?’ And I didn’t know the answer to that for a few weeks after I gave birth.” It’s just that sort of honesty that make her show so watchable for moms.

Her 6-year-old son Liam arrived just before her first season of Workin’ Moms.

If Reitman is believable as an overwhelmed mom in the first season of her show, there’s a good reason. She had a 3-year-old toddler and a 3-month-old baby at home. She and Sternberg welcomed son Liam in 2015, and trying to find time between parenting two kids and running a television series was a challenge. “For season two, I have two actual kids,” she wrote for Today’s Parent. “They both have their own personalities and their own demands. The series became more about how the relationships I have in my life have become more complicated. In season two, we follow these women on this new voyage of “OK, you’ve had your kids and you’re back at work. Now how do your friendships change? Now that you have less time and energy and beauty to give, how do your relationships change?”

She loves to be “lazy” with her kids.

As much as Reitman loves her work and makes sure both her sons know she loves it, she told People in 2019 that she loves to just be “lazy” with her kids. “I’m letting them play and jump all over me and trying to laugh and being a good, present parent, which can be very challenging when you work these hours. I walk them to the park. Sometimes I’m just dragging them on errands. All the things that normal moms do.”

Well, that and create a show that speaks to moms everywhere, workin’ or no.

More Like This
'Workin’ Moms' Season 7 Is Reportedly In The Works! Here’s Everything We Know
10 Parenting Lessons From Abbott Elementary That You'll Want To Write Down
'Squid Game' Is Coming Back For Season 2 On Netflix: Here’s What Parents Need To Know
Exclusive: Three Siblings With Super Powers Protect National Parks In Spirit Rangers