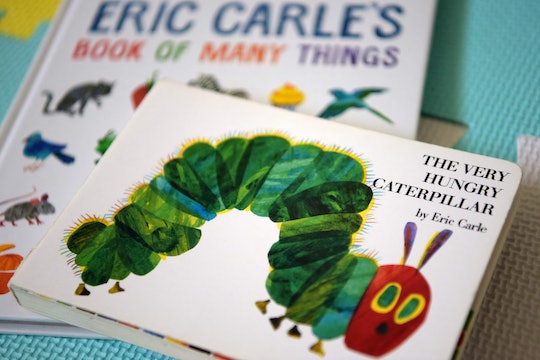 Psst! Eric Carle Fans Are Putting His Books In Their Windows To Celebrate His Birthday

They are pieces of art, after all.

Beloved children’s book author and illustrator Eric Carle died last month at the age of 91 years old, and his fans have come up with a lovely way to honor his memory. People are celebrating Carle’s birthday on June 25 with a sweet tribute. A way to remind each other of the enduring joy both children and adults continue to get from his books. He will live on in those pages, and we will continue to remember him well.

The author died at his home in Northampton, Massachusetts on May 23, and is survived by two children. In his lifetime, Carle wrote and illustrated more than 70 books, including the one that made him famous in 1969. The Very Hungry Caterpillar, which has sold more than 55 million copies around the world and has been translated into 70 different languages. What is it about Carle’s books that have stood the test of time, entertaining generation after generation? His bright, colorful illustrations, his clear and simple words, or a sort of underlying sweetness to the theme of growth and the beauty in all small things?

Whatever it might be that you love most about Carle’s books, this Friday will be your chance to join other fans in paying homage to his legacy as an artist. The Eric Carle Team took to Twitter to encourage fans to display his books in their front window on Friday, June 25, Carle’s birthday.

People can share photos of Carle’s books propped up in their front windows in the online tribute using the hashtag #RememberingEricCarle.

The award-winning author’s books are beautiful pieces of art in and of themselves, unique and immediately recognizable for their bright colors and surprising humor, like a hole going straight through a book a la The Very Hungry Caterpillar.

Carle once said that he wrote and illustrated his books to honor his own father, who taught him to appreciate the small, beautiful things in nature, “I think in my books I honor my father by writing about small living things,” per The New York Times, “And in a way I recapture those happy times.”

Sharing his work in our own windows on what would have been his birthday is our way of honoring his memory as well.