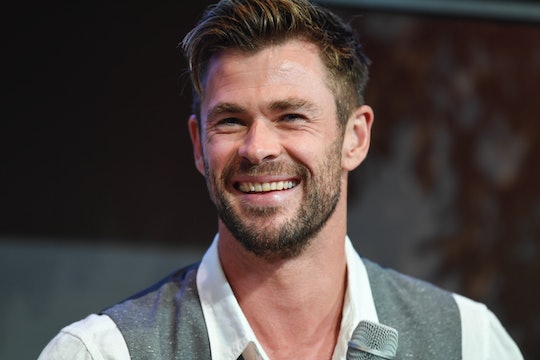 Chris Hemsworth Shared A Video Of His “Ultimate Family Workout”

Everyone wants to work out with Chris Hemsworth. The man who plays Thor is in exceedingly excellent shape, so his workout routine is presumably some sort of next level difficult. Except not always. Sometimes they are just plain cool and fun. For instance, Hemsworth shared a video of a workout he did with his 9-year-old daughter India Rose on a skateboard that you’ll probably want to try yourself.

Hemsworth shares daughter India and her 7-year-old twin brothers Tristan and Sasha with wife Elsa Pataky, and the family often takes to Instagram to share their fabulous outdoor adventurous life in Australia. Whether they are all on the beach together, riding horses, or trying out dirt bikes, it seems as though the family of five is always finding fun and inventive ways to stay active outside.

On Tuesday, the dad of three shared a new “ultimate family workout” he and his wife had invented. “All you need is a child, a skateboard, a horse and a Can Do attitude,” he captioned the first Instagram video that saw him running along a hilly track holding his daughter India’s hand as she skateboarded.

Chris Hemsworth came up with an ultimate family workout.

Hemsworth clearly got a heck of a workout as he ran alongside India, but the 9-year-old showed incredible balance as she stayed on her skateboard over several little hills.

The second video saw Patasky run with one of the couple’s twin sons sitting astride a pony, leading the pony through a series of turns and somehow managing to keep pace. Impressive. Almost like the family was putting on their own small version of the Olympic Games with their kids. Which would make sense; both skateboarding and equestrian events are featured at the Tokyo Olympics. And in India’s case, she is just four years younger than some of the breakout stars of the women’s skateboarding events. In fact, 13-year-old Momiji Nishiya of Japan won gold in street skateboarding, while 13-year-old Rayssa Leal won silver.

Maybe training with Thor himself will give India Rose an edge. Or maybe she’s just having a bit of fun. Either way... what a workout.