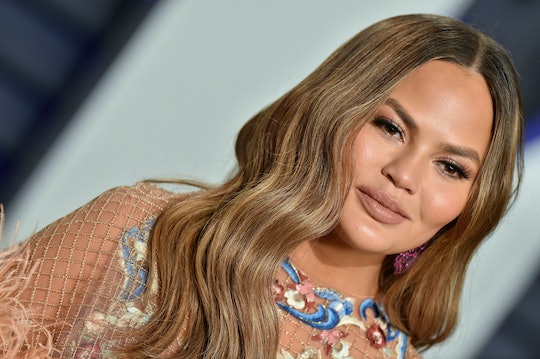 "I don't think I would have discovered therapy and then sobriety"

In the months since she announced the devastating news that she had lost her son Jack at 20 weeks gestation, Chrissy Teigen has opened up about her pregnancy loss has affected her and how she's coping with it all. Most recently, the Cravings author shared with Ellen DeGeneres that losing Jack ultimately "saved" her in a way.

As Teigen is working through her grief, she shared with DeGeneres during an appearance on The Ellen Show on Monday that the heartbreaking experience has been "hard" but also "transformative" for her.

"Even thinking back to it now, I am still in therapy about it and I am still coming to terms with it," Teigen told DeGeneres. "I have maternity clothes, and there are things that I bought for my eighth month and my ninth month. So it's just hard because he would've been born this week, so you look at those things and you have these constant reminders."

"It was a really transformative thing for me, and in a way it really saved me, because I don't think I would've discovered therapy and then sobriety, and then this path of feeling good about myself and feeling like a new person," she added.

Teigen first made the decision to get sober in November because, as she later revealed on her Instagram Story, she was "done with making an a** of myself in front of people" and was "tired of day drinking and feeling like sh*t by 6, not being able to sleep." Since then, Teigen has been open about her emotions in the wake of loss, talking about the regret she feels for not looking at Jack's face, the sadness surrounding his due date, and even the happiness she's experienced since getting sober.

"I know that's weird but it's like...a different world for me," Teigen wrote in a tweet about sobriety in January. "Everything is new and better. Very happy." She has even taken up riding horses as part of her therapy, having it be a hobby that she does just for herself, though her daughter Luna and son Miles have joined her.

Teigen told DeGeneres that throughout this rollercoaster over the past few months, she's emerged as a "better person."

"You really don't know the meaning of the word 'unimaginable' until something like that happens to you. And then afterwards, there's such a spiral of things you could've done differently and you start to get really tough on yourself," Teigen said during the interview. "But what you learn through it about yourself is such a wild, incredible thing."