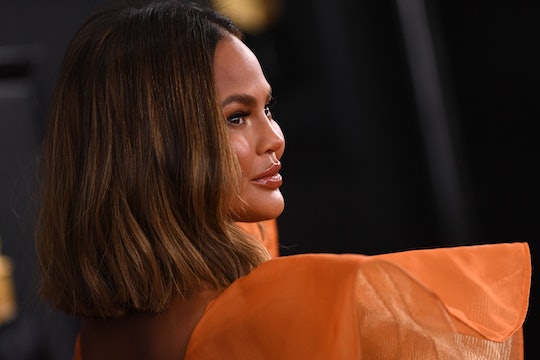 "He would have been here any day now."

Opening up about something as deeply personal and tragic as pregnancy loss is no easy thing. But in a post that will undoubtedly resonate with fellow parents who've experienced similar heartbreak, Chrissy Teigen opened up about losing her son Jack on Instagram during the week he was due to be born and shared that she's coping with feelings of regret.

In August 2020, Teigen and Legend announced that they were expecting their third child to join 4-year-old daughter Luna and 2-year-old son Miles through a music video shot on Mexico for Legend's song "Wild." At the time of the shoot for the video, Teigen was 10 weeks along.

"I was 10 weeks along and out of my mind happy," Teigen wrote on Instagram shared on Feb. 4. "I knew the video would take a bit to get together so thought it would be cute to share our news with the world through the ol classic hand on belly trick at the end."

Months after they announced their news, Teigen posted on social media that she had been hospitalized for heavy bleeding and later shared the devastating news that they had lost Jack.

"I could have never imagined what would happen over the next 10 weeks...not sure I’ll ever be able to watch that video again without sobbing but I hope he feels my tears and knows we miss him so," Teigen wrote on Instagram this week. "He would have been here any day now - if he were like Luna and Miles, I’d probably be holding him as we speak."

"I am so full of regret that I didn’t look at his face when he was born," Teigen continued. "I was so scared of seeing him in my nightmares that I forgot about seeing him in my dreams. I hurt every day from that remorse."

Losing a child is an indescribable grieving process that looks different for every family. It is not only the loss of a baby but also the loss of the life parents were expecting to have with that baby. Many of Teigen's followers commented on her post to share their own experiences.

"I wish grief worked on a time line," one commented. "Instead it floats about as if it’s fog in Marin or smoke from a really fat cigar. It gets inside of us and showers and sun only play games with it, like hide and seek. Our pain is never gone when we are told it will be."

"I lost my son 4 years ago at 28 weeks," another shared. "These intersections of milestones and memories are so hard. But it will get easier, I promise. You’ll always miss Jack, but Luna and Miles are so much light and life. They’ll help you through it, just being them."

Teigen's decision to lay bare the regret, the pain, the heartbreak of losing her son Jack is a staggering act of selflessness. Because it opens the door to a conversation some grieving moms might not have been able to access in their own lives. It opens the door to a kind of healing.