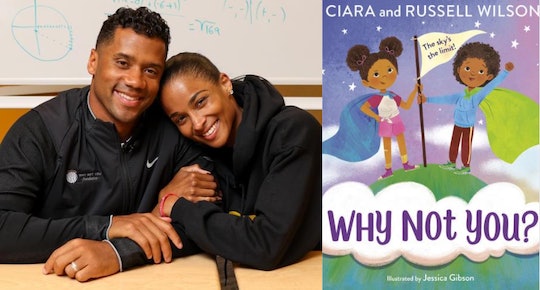 “Our parents raised us with a ‘Why Not You?’ attitude.”

Ciara and Russell Wilson are passing down generational wisdom they learned from their own parents to their three children. Among those values is leadership and having a mindset to push yourself to dream big. It’s a way of thinking that Ciara tells Romper inspired the title of the couple’s new children’s book, Why Not You?

“Our parents raised us with a ‘Why Not You?’ attitude, and we are doing the same with our own children,” Ciara says. “We lead by example to show them that with hard work they can achieve anything they dream of.”

Illustrated by Jessica Gibson and released on March 1, Why Not You? is about empowering children to believe in themselves and be leaders. “We want kids to welcome new challenges, push to higher heights, to level up, and a ‘Why Not You?’ attitude is needed,” the 36-year-old singer says.

Wilson echoed Ciara’s sentiments. “I think what’s really important for me and Ci is to also make sure [our kids] feel like they can pursue any dream they have and anything they want to be,” the NFL veteran quarterback tells Romper. “It’s all about teaching them love and acceptance and supporting them in whatever field or career they end up wanting to pursue one day.”

“We want kids to have that inspiration and confidence to succeed, to believe in themselves,” he adds of the message behind the book.

“Why not you?” is not an unfamiliar phrase to the Bart Starr Award recipient. Wilson’s father, Harrison, who passed away in 2010, used to ask him that question all the time growing up, as Wilson told The New York Times in 2014. And those words been part of his life ever since.

Like most of their joint entrepreneurial ventures, both Ciara and Wilson, who are co-founders of the Why Not You Foundation, enjoy working together. As an artist, Ciara explains how it was refreshing to express herself in a children’s book — and equally satisfying to experience her better half in such a creative space. “It was great to be able to write out my thoughts and express them in a book for children,” she says. “I also got to see just how creative Russell’s mind is off the field.”

As parents to Future Zahir, 7, Sienna Princess, 4, and, Win Harrison, 1, Ciara and Wilson are also instilling the value of reading. The Wilsons say the kids love reading, especially Future. “It’s our special time,” Ciara says. “Future is big into books right now, so he is reading all the time.”

Russell would occasionally read to the kids as well, in the end, there is only one who sits on the bedroom book throne. “They let me do some of the reading,” he says. “But it’s really Ciara who is the queen of reading.”

More Like This
Karamo Brown Teamed Up With His Son On A New Children’s Book To Share A Powerful Message
Anthony Anderson Thanked His Son For Inspiring Him To Finish His College Degree
Are You There God? It’s Me, Margaret Is Finally Heading To The Big Screen
Kelly Osbourne Reveals She's Pregnant With Her First Child & Can't Wait To Be A "Mumma"