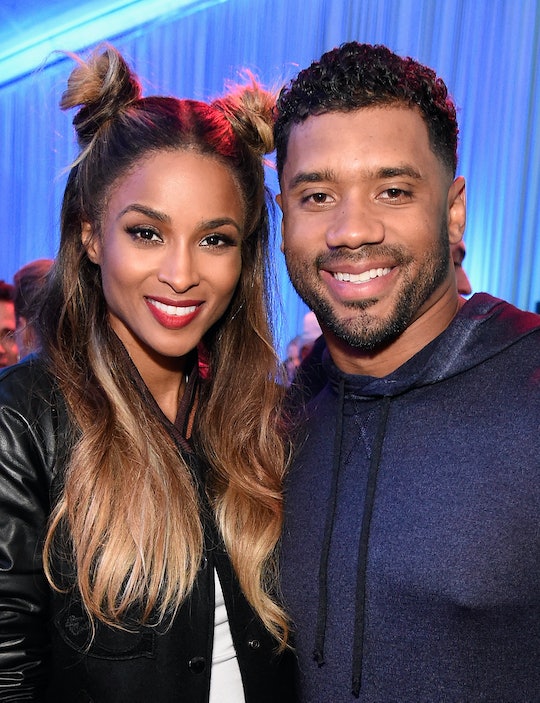 Win was in his own world as his dad received the 2022 Bart Starr award.

Last Saturday was a day of celebration for Seattle Seahawks quarterback Russell Wilson. He attended the Super Bowl breakfast as the recipient of the Bart Starr award along with his family. While his wife Ciara and their two older children, 7-year-old Future (who Ciara shares with her ex Future) and 4-year-old daughter Sienna looked incredibly proud to be celebrating Wilson as an exemplary leader and role model, 1-year-old son Win was... well, he was doing his own thing. Focused on his own interests, let’s say, as toddlers are wont to do.

It was a big deal for Wilson to be recognized for his extraordinary works, and to have his family celebrate with him. The proud dad gave his kids a shout out during his acceptance speech, reminding son Future that every day he tells him before he goes to school to “be a leader,” while daughter Sienna was praised for having “vision.”

As for baby Win? “Your name is pretty self explanatory,” he joked on stage. “W-i-n, there’s only one way to spell it.” Wilson also said that Win “represents discernment to me.”

You can sort of see what he means. In a video of their moment as a family on stage shared by Ciara on Twitter she captioned “That Proud Feeling,” little Win was quite discerning. Carrying a coffee cup he clearly swiped from one of the tables, staring off into space. And oh yes, he had also taken off his shoes and socks and went barefoot for the auspicious occasion.

He knew his look. And he went for it.

Ciara carried son Win on stage for her husband’s award.

Ciara looked utterly unperturbed by Win’s laissez-faire attitude on stage for his father’s award, which seems pretty fitting. He is her third baby, after all, and the proud mom managed to keep all three of her children dressed up in glam outfits and clean throughout the awards ceremony.

If we’re going to talk about a “win,” that’s it right there. Ciara and Russell Wilson, a real winning couple for sure.

Wilson won the Bart Starr award for his efforts as a leader in the home, on the football field, and in the community. Perhaps one of his most notable contributions to his community was the Why Not You Foundation and the Why Not You Academy, which is a nonprofit high school focused on educating students who are struggling with poverty. He also helped raise $10 million for Strong Against Cancer.

This entire family is all about the win. Especially adorable Win himself, swiping coffee cups and going through the world barefoot.

More Like This
Diane Kruger Revealed Her Daughter's Name (& Its Meaning) 3 Years After She Was Born
Zac Efron Was Asked If He Wants Kids & His Hilarious One-Word Answer Says It All
Take An Exclusive Look At A New 'Daniel Tiger’s Neighborhood' Episode About Pool Safety
There's Officially A 'CoComelon' Spinoff & It's All About JJ's Best Friend, Cody!