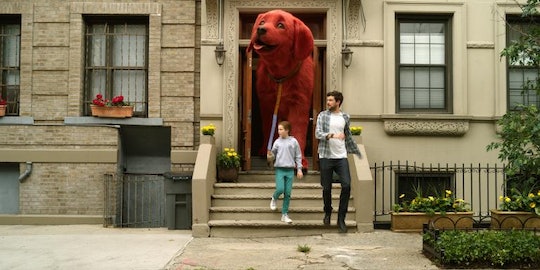 Life looks different for a big pup in the big city!

We all remember the original Clifford The Big Red Dog cartoon based on the beloved children’s book series written by Norman Bridwell. The 20-foot red dog, who grew big because he was loved so much, enjoys adventures with his best friend Emily Elizabeth on their island home of Birdwell. Adventures like helping kittens out of trees or reaching things on rooftops no one else could manage, things like that.

Well, it looks like the adventures might be a bit more high-octane in the live-action Clifford The Big Red Dog. As befits a rather more high octane cast. In Romper’s exclusive clip, fans see how Clifford’s size is a bit of a problem as Emily Elizabeth (Darby Camp) and Uncle Casey (Jack Whitehall) try to navigate living in New York City rather than Birdwell Island. Like when he tries to to squeeze into a moving van or topples a sofa down like a seesaw. Whitehall describes his time with the big red dog himself perfectly, “Clifford, he’s a bit of a mess, which is great.”

“I thought Clifford was very magical,” Camp shares in the clip. “But... I did get sneezed on by Clifford.”

The clip also features more famous cast members like Tony Hale (who plays Tieran), John Cleese (the magical animal rescuer who gave Emily Clifford when he was a puppy), and Rosie Perez (Lucille).

Clifford The Big Red Dog is the kind of upbeat, happy movie everyone in the family will love. The only problem will be convincing your kids they can’t have their own Clifford. Good luck with that.

Clifford The Big Red Dog premieres on Nov. 10 in theaters and on Paramount+. In the meantime, check out the movie’s new trailer!