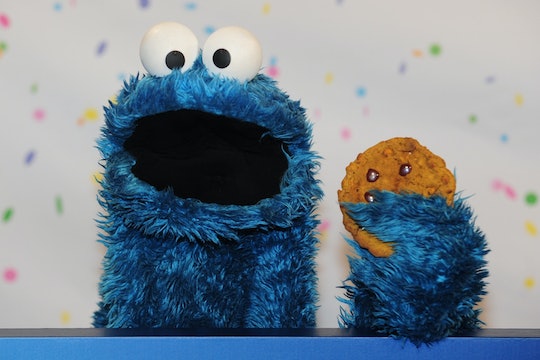 Sorry, but we’re gonna need a minute... and a sleeve of chocolate chippies.

Sesame Street is all ablaze with some hot gossip, as one of its most famous and furry inhabitants has just revealed some pretty exciting personal information. Not since Kylie Jenner scrawled out her infant son’s birth certificate has the uncovering of a celebrity’s name been so headline-worthy. In a recent tweet, the blue monster known to his legions of fans as “Cookie,” jumped onto social media to remind us all that he has another name. The grammatically-challenged monster, who adorably struggles differentiating his subject and object pronouns, shocked the world by admitting that his first name is in fact Sid. Yes, Sid.

Well, not everyone’s jaw dropped. But we’ll get to that in a bit.

In all went down on Twitter when the beloved monster with a sweet tooth took to social media to stir up some delicious controversy or simply share some basic facts with his more than 606,000 followers. “Did you know me name is Sid? But me still like to be called Cookie Monster,” tweeted the blue muppet from his verified account. (Of course cookie monster is so cool, he only follows 10 other accounts, including the likes of Elmo and Abby Cadabby.)

Some Sesame Street super-fans have been quick to point out that this information has already been readily shared. In Cookie’s moving musical origin-story The First Time Me Eat Cookies, the crumb-guzzler opens up about his insatiable childhood. The sweet song includes some lyrics containing a confused admission of what Cookie’s name might actually be: “Me was just a mild-mannered little kid. In fact, back then me think me name was Sid.”

Others who were unfamiliar with the biographical tune, were stunned to hear this revelation and were quite resistant to it too:

If this disclosure has inspired a desire to learn more fascinating things about the oatmeal-raisin gormandizer, here are some more interesting things you might not know about the cute blue monster and The-Not-Too-Late-Show With Elmo star. When he’s too not busy scarfing down a sleeve of chocolate chippies, he’s quite crafty and loves to knit! When it comes to some of his fave celebs, the star in his own right has exclusively revealed to Romper that he enjoyed working with the likes of Jason Sudeikis, John Mulaney, and duet-partner Ben Platt.

As a bonafide social media star, the blue cookie-chomping monster also has the biggest following out of all of his furry costars. We’re not sure what kind of drama is going down at 123 Sesame Street, but Cookie Monster does not in fact follow Snuffleupagus. (But that might just be because he’s only visible to Bird Bird.)

Also noteworthy on his official Twitter, Cookie Monster’s delightful bio: “Me official. Me love cookies! Me officially love cookies.” According to his blue checkmark-ed account, the googly eyed influencer also celebrates his birthday on Nov. 2. So whether you write your card out to Sid or keep it classic with “Cookie,” make sure to mark your calendar and wish the big guy a happy birthday. And with such close proximity to the yummiest fall holiday, maybe you can hook up a monster up with some of those leftover skeleton gingerbread cookies too?

More Like This
Rubble From 'PAW Patrol' Is Getting His Own Spinoff Series Full Of "Messy Demolition"
Here’s How To Watch 'A Charlie Brown Christmas' This Holiday Season
Exclusive: 'Firebuds' Dives Into Hanukkah Traditions In Festive New Episode
20 Heartwarming Episodes To Help Prepare Your Child For A New Sibling