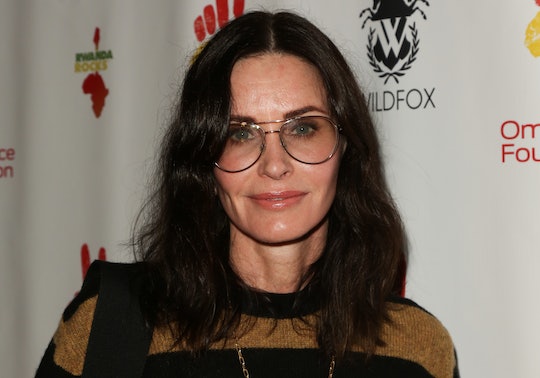 Courteney Cox Did The Turkey Dance From 'Friends' & Saved Thanksgiving

Chandler is gonna love this one.

This holiday season is weird, you don't need me to tell you that. There are going to be a whole lot of things that look different because of the pandemic and social distancing and this new world we live in. But some classic elements of our holidays will stand the test of time, as Courtenay Cox proved when she recreated the turkey dance from Friends in honor of Thanksgiving. If you needed something to feel thankful for this year, it's probably all you need.

Let me bring you back to a simpler time called the 90's, when Friends was part of the Must See-TV Thursday night lineup and every year featured a different Thanksgiving episode that became as much a part of the holidays as spending time with actual friends and family. One particular episode stands out for several reasons: Monica Gellar, played by Courteney Cox obviously, puts her head inside a turkey and dances around in front of her boyfriend, the super neurotic Chandler Bing (played by Matthew Perry). Instead of being repulsed by this clearly unsanitary display, he tells her he loves her and the live audience cheers and Thanksgiving is saved.

Courteney Cox took to Instagram on Thursday to save Thanksgiving with her turkey dance again.

Cox started off by sharing her Thanksgiving wishes with her followers, saying that she was "feeling so thankful" herself. Except for one small hiccup; she's sort of tired of getting GIFs of herself "with a turkey on my head dancing like a f***ing fool." In fact, if she gets one more she promised, "I'm just gonna snap."

Fortunately, Cox is a generous soul who offered an alternative to the tired old video of Monica dancing with a turkey on her head. An update. "So anyhow, since I'm the symbol of Thanksgiving, here you go, hope it makes you happy."

It made people happy, especially since she included the iconic sunglasses on the turkey's head which are obviously essential.

The video was a perfect reminder of what fans can look forward to with the Friends reunion that is set to begin filming in 2021 for HBO. If ever there was a time when people desperately needed a little nostalgic joy to make them feel right with the world, it's the 2020 holiday season. And Courteney Cox just saved it by putting her head inside a turkey.

More Like This
Here’s How To Watch The National Dog Show On Thanksgiving Day This Year
Meghan Markle Spent Her Thanksgiving Volunteering For A Cause Close To Her Heart
Macy’s Thanksgiving Day Parade Has Been Delighting Families Since 1924
"Corn Kid" Handed Out Over 40,000 Cans Of Corn At A Food Bank Ahead Of Thanksgiving