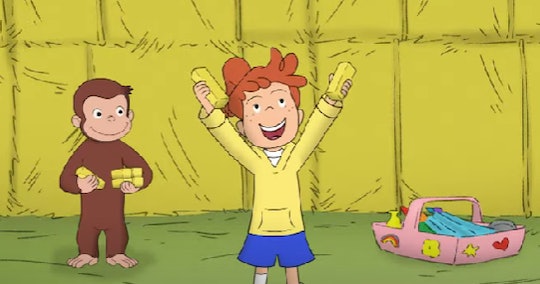 New Curious George Halloween Episodes Are Coming & We Have An Exclusive Sneak Peek!

It’s all about a fun-scare.

PBS Kids is treating families to some special Halloween fun for the spooky season with two new episodes of Curious George. In an exclusive new trailer shared with Romper, the most curious monkey in the world tries his hand at some Halloween decorating, and of course the Man with the Yellow Hat has some feelings about it.

PBS Kids kicked off its annual Halloween programming for kids on Oct. 10 with all-new themed episodes of favorite shows like Alma’s Way, Donkey Hodie, Molly of Denali, and not just one but two Halloween episodes of Curious George, and Romper has an exclusive sneak peek at one of them!

A teaser clip from “Tale of the Frightening Flapjacks” sees George and the Man with the Yellow Hat head to a pumpkin patch to pick out the perfect pumpkin to make a Jack-o-Lantern for a Halloween bonfire. After Bill tells a scary story based on an interrupted dream he had about flying flapjacks and a Griddlecake Grizzly, George and Allie try their best to recreate his dream to give him a little fun-scare. There’s a sweet little musical number about having bad dreams that will hopefully put little ones at ease during the spooky season; a bit of a scare isn’t such a bad thing after all.

“Tale of the Flying Flapjacks” premieres on Oct. 14 on PBS Kids alongside “Happy Yelloween,” another Curious George Halloween special. This time around, George dresses up like an elephant while his friend Allie is a dragon to go trick-or-treating, but unfortunately their plans are interrupted by rain. After they realize the rain won’t give up, they change their plans and celebrate Halloween indoors with all of their friends... with a little help from the Man in the Yellow Hat’s closet. Another nice lesson from Curious George about dealing with disappointment and shifting plans when the unexpected happen.

Alongside these two new Curious George Halloween episodes, PBS Kids will bring back seasonal favorites like The Cat in the Hat Knows a Lot About Halloween!, Curious George: A Halloween Boo-Fest, Wild Kratts: Creepy Creatures, and Arthur and the Haunted Treehouse, all available between Oct. 10 and Oct. 31. The new Halloween episodes of Alma’s Way, Donkey Hodie, Curious George, and Molly of Denali are all streaming free on PBS Kids right now, which is absolutely a treat for parents looking for something to get their kids in the holiday spirit.

More Like This
Rubble From 'PAW Patrol' Is Getting His Own Spinoff Series Full Of "Messy Demolition"
20 Heartwarming Episodes To Help Prepare Your Child For A New Sibling
Here’s How To Watch 'A Charlie Brown Christmas' This Holiday Season
Exclusive: 'Firebuds' Dives Into Hanukkah Traditions In Festive New Episode