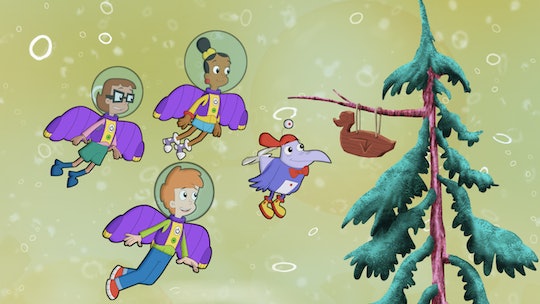 The Emmy award-winning PBS series is celebrating its 20th anniversary!

The ability to turn math into something fun that kids are genuinely interested in learning about is nothing short of magic, which is what makes the Emmy award-winning PBS series Cyberchase so special. The story of three kids from Earth having STEM-centric adventures in the digital universe is celebrating its 20th anniversary this year by launching a brand new season, and that’s good news for kids and parents alike.

Season 13 premieres on Feb. 25 on PBS Kids with four back-to-back episodes airing from 7 to 9 p.m. EST. Inspired by timely topics, these new episodes will find characters Jackie, Matt, Inez, and feathered friend Digit on a variety of environmental adventures, fighting such enemies as pollution and invasive species and protecting coral reefs, biodiversity, and more. The best part, as Cyberchase fans know, is that the kids tackle every challenge using their math and problem-solving skills. Of particular interest to longtime fans: Actor Christopher Lloyd will be back in his Emmy-nominated role of the “Hacker.”

Each episode will be accompanied by live-action epilogues titled “Cyberchase: For Real,” which take the math and environmental concepts explored in the animated universe in the real world.

Getting excited for the new season? Check out Romper’s exclusive clip, in which Lloyd’s bumbling villain “Hacker” finds himself all wet:

If your kids haven’t met these smart and sassy characters yet, you’ll have a great time introducing them to the Cyberchase gang (watch episodes from earlier seasons on PBS Kids or Amazon). Cyberchase debuted in 2002 and went on a hiatus in 2010 after the Season 8 finale, only to return in 2013 for four more seasons, so there’s plenty of material for new fans to catch up on.

In Season 13, kids will be introduced to such topics as migration, mapping, sustainable design, geometry and more. Except they probably won’t notice, because they’ll be too engaged in the exciting storylines.

Catch the brand new season of Cyberchase on Feb. 25 on PBS Kids channel from 7 to 9 p.m EST.