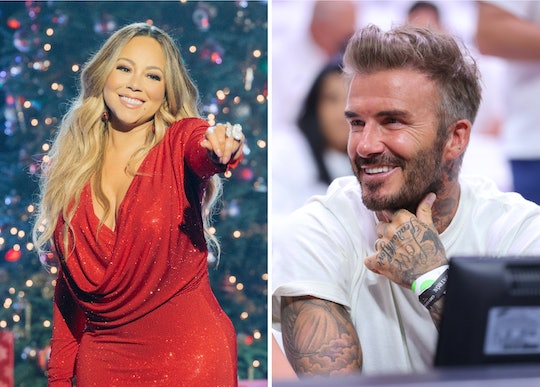 David Beckham is a man of many talents. Not only is he considered the GOAT of professional soccer, but he also has some vocal cords that impressed Mariah Carey herself! In a video captured by his wife, Victoria Beckham, the pro footballer and father of four belted out to Carey’s “All I Want For Christmas” and gained a new fan in the songstress.

The former Spice Girl posted an Instagram video of her husband singing the song in their London kitchen while looking at his cell phone. “@davidbeckham giving us his best @mariahCarey 🎶 🎄😂,” she captioned the video.

In the video, Beckham is seemingly unaware that he is being recorded as he sings the Christmas tune. Victoria coughs to get his attention and says, “You were struggling with the high note weren't you?!” Beckham jokingly responds to his wife, “Like you do?” and then belts out a high-pitched “Youuuuu” in cue to the song’s catchy chorus.

Beckham also commented under his wife’s post with a simple Santa emoji.

Journalist Derek Blasberg replied, “What can’t he do? ❤️”

Carey’s super successful 1994 holiday jingle recently made Billboard’s Top 100 Holiday list at #5 and is considered one of the greatest holiday songs of all time. It’s part of her 1994 Merry Christmas album, which also includes seasonal favorites such as her renditions of “Silent Night”, “Santa Claus Is Coming To Town,” and “Miss You Most.”

“When I wrote it, I had absolutely no idea the impact the song would eventually have worldwide,” Carey told Billboard about the song. “How could I? It was so early on in my career and most young artists, at that time, weren’t really making Christmas music at the onset of their careers.”

She went on, “When writing [‘All I Want For Christmas’], I was tapping into a bittersweet mixture of longing and festiveness. I had grown up wishing I could have a functional family Christmas like the ones I saw on TV or in the movies, but truth is … that never happened! So, I wrote the song for the little girl in me filled with holiday spirit.”

No word yet on what plans Christmas plans the Beckhams have in store this year, but it's clear Carey’s song is one way the family is kicking off the holiday season.