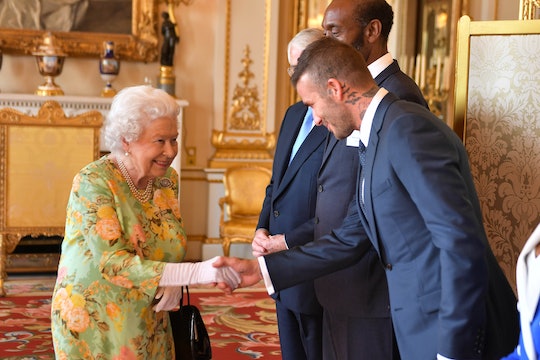 And he brought donuts for others waiting in line.

Queen Elizabeth’s death after 70 years as monarch has the British people rallying to pay their respects to Her Majesty. So much so that people are lining up for hours and hours at a time to pay their respects to Queen Elizabeth as she lies in state at Westminster Hall. And one of those people who quietly joined the line at 2 a.m., estimated to be approximately four miles long, was soccer legend David Beckham. Wearing a suit and carrying an umbrella, looking like the quintessential Brit saying goodbye to his Queen.

Beckham was spotted by fellow royal fans on Friday afternoon standing in line, but he admitted that he had actually been quietly lining up with everyone else since 2 a.m. He had already been there for around 12 hours, and looked to be in pretty good spirits. Beckham, who was awarded an Order of the British Empire by Queen Elizabeth for Services to Football in 2003, spoke to ITV News as he was in line about a particularly fond memory he had of Her Majesty. “A special moment I’ll always remember is receiving my OBE. I took my grandparents with me, who were the ones who brought me up to be a huge Royalist and a fan of the royal family.”

Once Beckham was spotted in line, of course other royal watchers couldn’t help being excited to be lining up with the retired soccer star. Especially those closest to him since he was reportedly buying them donuts, according to a tweet from i newspaper, “David Beckham has been spotted in the queue for the Queen’s lying in state. He starting queuing at 2am this morning ‘thinking it would be quiet’ and has been buying people near to him in the queue donuts.”

It was a kind gesture for people who must be tired waiting in a line-up that has snaked its way through all of London. A line that was apparently slowed down significantly by people who stopped moving in an effort to take photos with Beckham. When the soccer player finally made his way to see Queen Elizabeth’s coffin, Sky News reports that he looked emotional, removing his cap and bowing his head to pay his respects. “So this day was always going to be difficult, and it's difficult for the nation, it's difficult for everyone around the world, because I think everyone is feeling it, and our thoughts are with the family and obviously with everybody here today,” Beckham told reporters about his time lining up with fellow royal fans. “Because it's special to be here, to celebrate, and to hear the different stories that people have to say.”

Perhaps that’s all part of the grieving process. Being with other people who know how you feel. And sharing a donut.