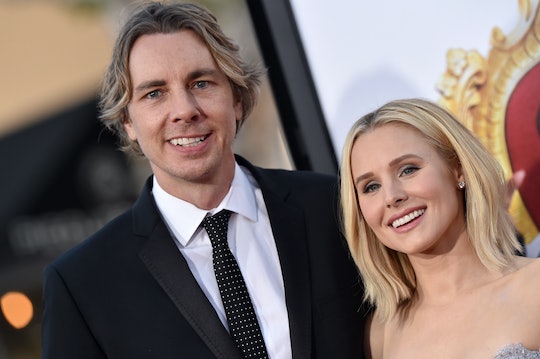 If you’ve ever had mastitis while breastfeeding you know. It’s painful. And uncomfortable. And makes feeding your baby a real chore. Unless you have a partner like Dax Shepard, who extracted clogs from Kristen Bell’s breasts when she was breastfeeding like a true champion.

Shepard and Bell, who are parents to 8-year-old daughter Lincoln and 6-year-old daughter Delta, sat down for an interview with Drew Barrymore on her talk show, and the topic of mastitis came up. Perhaps because Bell had been so open about how she handled dealing with the condition that causes milk ducts to become blocked and often leaves moms with flu-like symptoms in a 2018 episode of Momsplaining. "I said to my husband, 'I just need you to suck this out,’” Bell explained of her experience with mastitis, "We could talk about it. We could be weird about it, or you could just go ahead and nurse."

Now Shepard is telling his side of the story. “Let's just say that I extracted mastitis and we'll leave everyone's imagination to wander,” Shepard told Barrymore. “Let me also add that it is not easy and not rewarding. I mean, it is to know that you helped your partner, but other than that. It’s where the rubber meets the road. It’s down in the trenches.”

It was certainly rewarding for Bell, who told Barrymore, “I realized the level of commitment that this man had to me.”

So how did he do it? “He pulled it out,” Bell previously explained on Momsplaining. “He had a cup next to him. He was pulling out and spitting into this cup, and I've never been more in love in my life.”

The Frozen actress claims the method worked. Just in case any breastfeeding moms out there were curious. Although it should be noted that the Centers for Disease Control & Prevention (CDC) recommends speaking to your health professional if you have mastitis. There are some medications that can help as well. The CDC also notes that breastfeeding does help to reduce the breast abscesses causing clogs in milk ducts, so take from that what you will.

Dax Shepard’s heroism in the face of his wife’s painful mastitis is a message to us all. Do better. Be better. Get down in those trenches with the one you love.