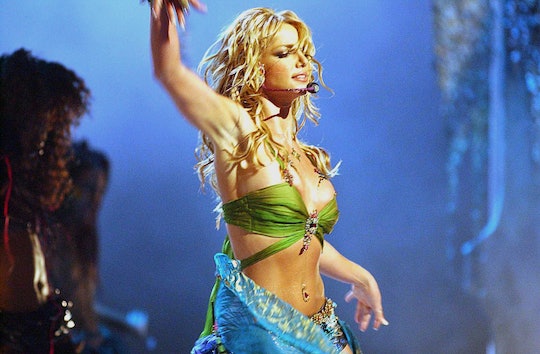 A 2003 interview with Britney Spears is going viral after Diane Sawyer said the pop star has "upset a lot of mothers in this country."

In The New York Times Presents documentary Framing Britney Spears, filmmakers unpack how the media failed the young pop star in the early 2000s. But one interview in particular featured in the documentary highlights that, although we've made progress on many fronts, absurd expectations from parents still linger today. Indeed, Diane Sawyer's interview with Britney Spears from 2003 has gone viral for several reasons, but perhaps mostly for how it exposes outdated parenting views that continue to be perpetuated against young female celebrities.

In 2003, Sawyer interviewed Spears, who was just 22 years old at the time, on ABC Primetime Thursday and asked the pop star about several topics, including her recent breakup with Justin Timberlake, laying all of the blame at her door. "You broke his heart. You did something that caused him so much pain, so much suffering. What did you do?" the revered television broadcast journalist asked Spears.

Spears responded patiently, "I think we were both really young, and it was kind of meant to happen, and I will always love him. He will always have a special place in my heart."

Sawyer went on to tell the "Toxic" singer that she had "upset a lot of mothers in this country," before sharing footage of then-Maryland First Lady Kendel Ehrlich, a mom of two herself, who said, "If I had an opportunity to shoot Britney Spears, I think I would." What's more, Ehrlich said this at an anti-violence rally.

Perhaps even more jarring? Sawyer, who does not have children, actually defended Ehrlich's comments. After Spears said "Oh, that's horrible," after seeing such vitriol spewed about her, Sawyer said, "Well, because of the example for kids and how hard it is to be a parent." As though that excuses Ehrlich's open threat against a young woman she has never met.

Spears' response? "Well that's really sad that she said that... I'm not here to, you know, babysit her kids."

Diane Sawyer is taking heat on social media over her treatment of Britney Spears.

The culture of calling out young performers as "bad influences" for choices they make — in their personal lives, their clothes, their songs — does seem to fall squarely in the laps of women. And much of it can come from moms in the spirit of protecting their kids and trying to create role models out of popular celebrities. Spears' younger sister Jamie-Lynn was 16 and the star of Nickelodeon's Zoey 101 when she announced she was pregnant. The New York Times' coverage in 2007 included interviews with parents, including one mom who told the newspaper, "I want my daughter's mind in the real world. But this is not what my daughter is going to do in her life. She knows better. She knows right and wrong. I never expected her, of all people, to do this. She's supposed to be the good one in the family."

Today, Cardi B is often a target. The popular rapper, who is a mom herself, recently responded to criticism that her music was not appropriate for children by reminding her Twitter followers that's not her audience. "Ya needs to stop with this already! I’m not jojosiwa!" she tweeted. "I don’t make music for kids I make music for adults. Parents are responsible on what their children listen too or see. I’m a very sexual person but not around my child just like every other parent should be."

Just last year at the Super Bowl, parents were up in arms over the high energy, sexy performances of two moms, Shakira and Jennifer Lopez. As though becoming a mother automatically negates a woman's sexuality or forces her into a puritanical box. Their performances received more praise than criticism, a sign that things appear to be slowly moving in the right direction.

Celebrities are performers. They don't owe it to anyone to be a role model, good or bad. They are not responsible for policing themselves, for denying their own sexuality or modifying their clothing. And they are certainly not responsible for raising anyone else's kids. It's time to stop expecting young female celebrities to be held to a different standard than their male counterparts. No one is asking celebrities like Dwayne "The Rock" Johnson, Idris Elba, or any of the other winners of People's "Sexiest Man Alive" to "cover up" or police themselves. Instead they're given a magazine cover.

Though this mindset still exists, the world is changing. People on social media have called out Sawyer's appalling treatment of Spears in 2003 and demanded the journalist apologize. "I don’t care how long has passed — Diane Sawyer should be ashamed of herself," one person tweeted.

It's been nearly two decades since that interview, but the idea that celebrities should be setting a "good example" for our children still appears. As a mother of two teenage sons, Sean Preston and Jayden, Spears is finding her way as a mom after all of those years of being vilified. As she wrote in a beautiful open letter to her boys in 2016 for TIME, she hopes she's able to teach them "strength."

"I pray as a mother I teach you strength and passion to carry through the struggles in the world," Spears wrote. "Most battles will always be won on your knees. I pray you find your dreams."