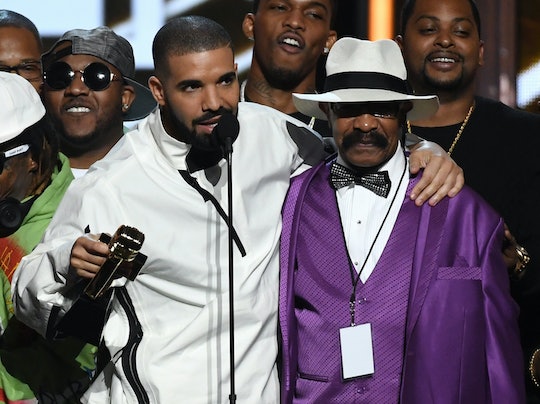 Drake’s dad is one proud papa. Actually, he is so proud of his talented son, the admiration is inked on his skin. But Drake, well, let’s just say he has some thoughts about the outcome.

The four-time Grammy award-winning rapper’s father, Dennis Graham, got a tattoo of his son’s face on his arm several years ago. But it seems the “Laugh Now Cry Later” rapper has been thinking about it lately and recently poked some quirky fun at his dad’s ink on his Instagram page.

“@therealdennisg,” he wrote, tagging his dad’s Instagram handle, “I was just sitting here thinking why you do me like this we family 😂😂😂.”

Graham, who is a musician himself and a drummer, got the ink of his son’s face on his arm back in 2017 by artist Money Mike. “Had the honor and privilege of tattooing @champagnepapi fathers portrait on the man himself @therealdennisg thank you again Dennis for the hospitality and for letting me do this for ya,” Mike captioned the 2017 post on his Tumblr page. “CHUUUCH!”

The tattoo reportedly took four hours to do and the artist did it for free, according to TMZ.

Inking one another’s love for each other runs in the family. In 2014, Drake had a tattoo of his dad created on his arm. Back in 2019, the pair were not in a good place after Graham made false claims to the media that his son fabricated their relationship to sell records. “Woke up today so hurt man,” the “God’s Plan” artist shared on his social media at the time, as reported by Hola! “My father will say anything to anyone that’s willing to listen to him. It’s sad when family gets like this but what can we really do that’s the people we are stuck with.”

However, over the years the two have seemed to work on their relationship and are reportedly closer than ever before and is a proud grandpa to Drake’s only son, Adonis. Drake is also Graham’s only son.

Indeed, Graham’s relationship with his son is something he clearly values. In 2021, Graham created a father/son video on YouTube that featured him and Drake and other heartfelt images of sons and their dads. And last October for his 35th birthday, Graham posted a touching caption for Drake, calling him “Clint Westwood.” He wrote in part, ‘there’s only one I love you Son 🎂🎂🎂🎂🎂🎂🎂🎂❤️❤️❤️❤️❤️❤️❤️❤️❤️.”

Clearly the roast over his dad’s ink of him is just harmless fun. The gesture is no doubt a true demonstration of a parent’s love. So it seems the true message here is if you really love your dad and/or kid, tat their face on your body so that they know it's real!

More Like This
Cardi B Issued A Hilarious Warning For Anyone Who Tries To Touch Her Gift From Beyoncé
Abbott Elementary's Sheryl Lee Ralph Received A Beautiful Gift From Beyoncé
Little Black Girls Are In Awe Of Halle Bailey In The Little Mermaid
Zaya Wade Is Rocking New Long Hair & As Gabrielle Union Put It, She's A "Vision"