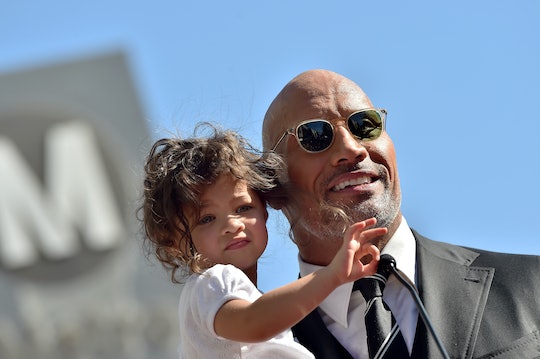 Imagine what it would be like to be the child of a world famous celebrity like Dwayne “The Rock” Johnson. Everywhere you go, people recognize his face. Or at the very least his muscles. Would it be irritating? Or would you deal with it like his daughter, who has the absolute sweetest reaction to people recognizing her dad.

Johnson is a proud girl dad to three daughters, 20-year-old Simone from his previous marriage, as well as 5-year-old Jasmine and 3-year-old Tiana with wife Lauren Hashian. The Red Notice actor is all about spending time with his daughters, driving them to school on mornings when he’s not working and taking them to the park. Places where he frequently gets recognized as his other name from his days as a WWE star, The Rock. And his daughter Jasmine has figured out that The Rock is the other name people call her dad.

“So now, what [Jasmine will] do is if she gets wind that someone is noticing me — we're at a park and kids are noticing or parents — she'll come up and grab me and she'll go, ‘Dad, come on! They recognize you. Come, say hello. Come on, you're The Rock!’” Johnson told Hoda Kotb on TODAY. “So she pulls me over to this family. And she's, like, ‘Here. This is my dad.’”

When Kotb enthused about how sweet Jasmine’s reaction was, Johnson couldn’t help smiling. “Yeah, it’s the best,” he admitted.

Dwayne Johnson gets recognized with his daughters.

Jasmine and her sister Tiana have become somewhat Instagram famous themselves, thanks to their dad’s frequent posts about their adventures together. Whether he is spending a Sunday giving his daughter the “best mani in town,” playing Barbies with them (where he just sits with Barbies getting ignored by his daughter), or spending a day at the pool with them, Johnson makes it clear they are his priority.

And they think he’s pretty amazing, too. Especially when they get to see him at work being all famous and such. While Jasmine is dragging her dad around the playground to show him off as The Rock, daughter Tia likes to eat breakfast with him and watch him on the television at the same time. When he asked her what she thought of his performance as Black Adam in a trailer, all she had to say was “cool.” That just about sums this family up perfectly. Cool.

More Like This
Nick Cannon Announced The Birth Of His 9th Child, A Daughter Named Onyx
Ben Stiller Hit The Emmys Red Carpet With His Daughter Ella
John Mulaney Teaches His Son To Say "Ahh" After Drinking Water In A Super Cute Video
Kanye West Apologizes To Kim Kardashian For The Stress He Caused The Mother Of His Children