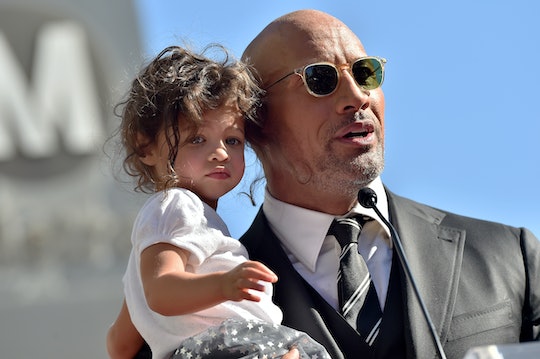 “She can say ‘Awthum gurl’ all day long... as long as she knows she’s awesome, that’s all that matters.”

In honor of International Women’s Day on Monday, Dwayne Johnson taught his daughter Tia to say she’s “awesome” in the sweetest video. Not only was it an adorable moment, it was also a beautiful reminder of how important self love mantras are no matter your age. Maybe everyone should take a page out of 2-year-old Tianna’s book and remind themselves that they’re awesome and smart. Especially if The Rock is standing there guiding you through those positive affirmations with his smile and his muscles.

Johnson often shares the most precious videos on Instagram featuring his two younger daughters, 5-year-old Jasmine and 2-year-old Tianna with wife Lauren Hashian. (Presumably his oldest daughter, 19-year-old Simone with ex-wife Dany Garcia, does not want to take part in these videos. Teenagers, am I right?) This most recent installment features the proud girl dad with little Tia in his arms (please note her amazing curly hair) on Instagram as he says to her, “Can you say ‘I’m a pretty girl,” which she adorably repeats.

The proud dad continues, “That’s right, even more importantly than that, can you say ‘I’m an awesome girl.” When she repeats that, this time with a smile, he adds, “I’m a smart girl. I’m a very smart girl. And I want you to say ‘I can do anything.’” Tia proudly repeats everything... until he tries to trick her into saying “Daddy’s the best.” She says it until she quickly corrects herself, “Mother!”

“She can say ‘Awthum gurl’ all day long... as long as she knows she’s awesome, that’s all that matters,” Johnson captioned the video. “And her declarative MUDDER!! at the end seals the whole deal - she know’s who the real boss is.”

The Moana star has long made it clear that he wants to raise his daughters to be strong, empowered women. In 2017, he shared a beautiful message about his goals for his daughter Jasmine, writing, “Jazzy, let daddy tell you his goals. By 5, you'll be looking people in the eye when you firmly shake their hand. By 8, you'll know how to fish, drive daddy's pick up truck and do cardio. And by 10, you'll be able to directly say to people, ‘Great job, I like it a lot, but let's see how we can make it better.’”

Tianna is only 2 years old, but those self-love affirmations are already reminding her that she’s smart, she’s awesome. And her dad sure does love her.