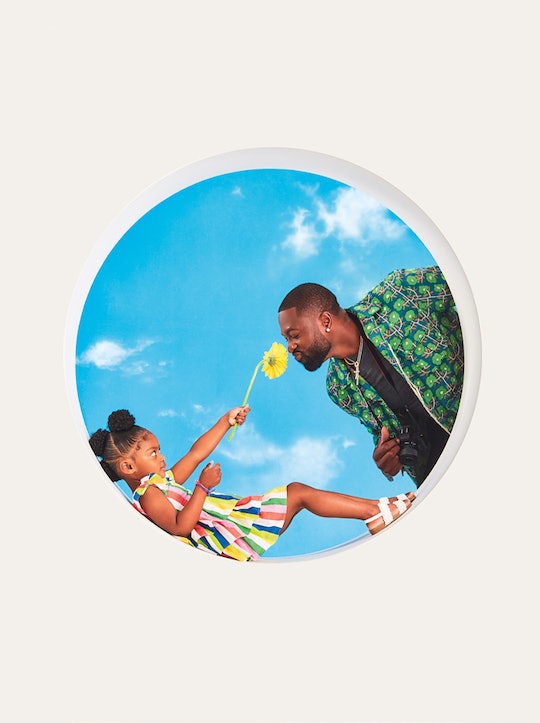 “It all revolves around Kaavia.”

Dwyane Wade can’t say he wasn’t warned. Before he and wife Gabrielle Union welcomed daughter Kaavia James, his fourth child, in 2018, friends told him having a baby girl would change things. “I think what a lot of what people told me before I became a girl dad — ‘it’s over for you’ — that’s true,” he tells Romper. “You turn from being this hard dad to now you’re soft as the pillows you sleep on.”

“I tell this story because it’s real,” he continues. “I was following her around outside one day in her little car, and she looked back and looked up at me and said, ‘Daddy, I love you’ and I was like ‘Aww, that was so sweet.’ And then she pulled over, got out, grabbed my hand, and was like, ‘OK dad; let’s go shopping now.’ And I’m like ‘OK. This is the future...’”

But for the present, if 3-year-old Kaavia wants to go clothes shopping, she can actually choose from items from her very own line — the Kaavia James Union-Wade collection for children’s fashion brand Janie and Jack. The line is full of bright colors and whimsical designs that even Shady Baby herself wouldn’t side eye.

“We wanted to create a collection that brings what we know we want to bring to the world, which is a world of joy and magic,” Wade says. “We wanted to see a world of young Black girls seeing themselves in kid’s fashion.”

Of course Kaavia has been able to see herself in the fashion world from an early age by virtue of her parents’ careers. “Kids mimic a lot of what they see their parents do,” Wade says, “so Kaavia gets to see her mom and dad always putting on clothes, taking photos, having photographers at the house, doing videos. When she sees her mom in the chair getting her hair and makeup done, she’s like ‘Oh! I want to get my hair done,’” he says. “When I’m doing my fittings, she is in the room helping me, grabbing pieces. Like ‘Here dad try this on.’ I love the fact that she gets into the things that we are passionate about, and now it’s become some of the things that she enjoys, that she looks forward to.”

While she may occasionally deign to take an interest in her super-star parents’ careers, most of the time there’s no question of who runs the Union-Wade household. “It all revolves around Kaavia,” Wade laughs. “What do you want to watch, what do you want to eat?’”

Ultimately, though, this isn’t about capitulation to a tiny dictator (though, really: all toddler parents have been there at some point, right?). Wade says it’s important that he and Union follow their daughter’s lead to give her the tools, experiences, and connections she’ll need to pursue her whatever her passion may be. “All the things we see her gravitate towards, we try to support that,” he explains. “So I think that in 20 years, that will allow her to have more self-confidence and creativity ... with these opportunities she has the sky is literally the limit.”