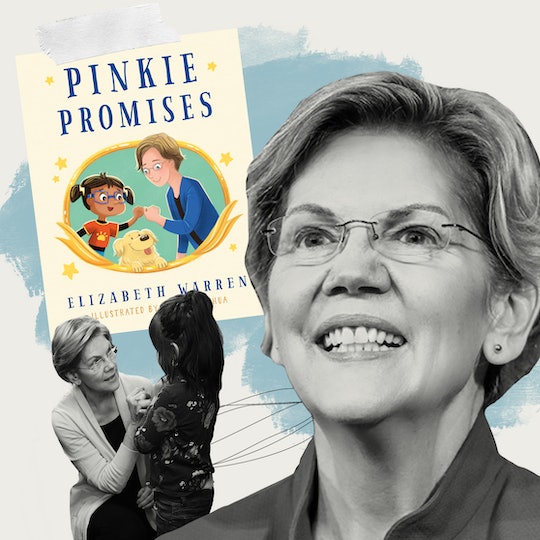 "The Courage Is In Trying:" Elizabeth Warren On What Makes Her Deeply Hopeful For Our Kids' World

The Senator’s new children's book, Pinkie Promises, celebrates the win that comes from the attempt.

When I confess to Sen. Elizabeth Warren that I hail from a strong family tradition of failed class president campaigns (my daughter taking up the mantle in the new generation), her delight over the phone is palpable. “But that’s a good thing!” she says. “Think about it — it’s so much better to have gotten in the fight, to have learned from it, and to have changed the world just a little bit. The courage is in trying.”

The willingness to take on a fight, even one she might lose, has been a strong throughline of the Elizabeth Warren story. Her life’s work is an argument that the attempt itself — even in the face of unfavorable odds or powerful adversaries (like, say, Wall Street) — is worthwhile. This is also the theme of her new children’s book, Pinkie Promises, which tells the tale of Polly, a little girl who gets tired of being told what girls can’t do.

“It was truly a labor of love,” Warren says of writing the book, inspired by the thousands of girls she met on her 2020 campaign trail. You can probably picture it: Warren on a stage or in a small crowd, bending down to introduce herself to a small person with starry eyes, saying, “My name is Elizabeth, and I’m running for president because that’s what girls do.” They seal their bond with a pinkie promise — that they will both keep fighting for what they believe, and for a world where girls run for and win presidential races.

Little girls sometimes very much projected onto those pinkie promises. ‘I want you to win. And then I’m going to be the next woman president!’

The story, featuring lively artwork by award-winning illustrator Charlene Chua, is exactly the kind of entertaining, earnest, and joyful adventure you’d expect from Elizabeth Warren. Below, Romper chatted with the senator about her book, about raising children in what feels like an incredibly scary time, and about her deep and abiding hopefulness for the world in which all of our kids are growing up.

Romper: Was there one thing in particular that inspired you to put this book into the world?

EW: It was all those little girls I met and did pinkie promises with. When my campaign was over and the world shut down for Covid, I kept thinking about those little girls and what I wanted them to take away from our brief time together. That’s the story of Pinkie Promises. It’s about a little girl who hears a lot about what girls can’t do, but decides that she will be the girl who tries it all. What I love about Pinkie Promises is the win is in trying.

Are there any pinkie promises from your campaign trail that really stood out in particular to you and stayed with you?

You’ve seen so much since you were born in Oklahoma; you’ve seen this country, the world, go through a lot of turmoil and change. Do you think that things really are scarier and worse than ever, or does it just feel like that? How hopeful do you feel today about the future versus how hopeful you felt when, say, when you were a young mom?

The Senator as a new mom, holding her baby daughter, Amelia. “From my mother to me, my daughter and my granddaughter, that’s an extraordinary amount of change in this country. While some of that change is scary, the overall direction gives me deep and abiding hope,” Warren says.Courtesy of Elizabeth Warren
Elizabeth Warren and her children, Amelia and Alex.
1/2

EW: I sometimes think about... Do you ever do this? Do you look back... We celebrate Francis Perkins, the first secretary of labor. Frances Perkins put together social security, recognition of unions, wage and hour laws, health and safety in the workplace... the weekend! Frances Perkins was amazing. But look at the photographs that Frances Perkins is in. She is one woman in a sea of white men. She is the first woman Cabinet member and she was appointed in the 1930s. Not the 1830s. So when you think about, from my mother to me, my daughter and my granddaughter, that’s an extraordinary amount of change in this country. While some of that change is scary, the overall direction gives me deep and abiding hope.

In your story, Polly’s mom takes her to a political rally, which is something that I think a lot of our readers can relate to these days.

What’s your advice for helping our kids feel empowered to get involved, but in a way that’s still... I worry that they feel like the grownups are not doing a very good job and they have to fix things. Because the world feels so unstable to them; they’re so aware now of every news story. How do we help our kids feel empowered to make change without feeling like no one’s running the ship?

EW: It’s celebrate the effort. Celebrate the willingness to try. Don’t put on kids that they have to solve climate change by themselves and do it now. It’s celebrate the creative idea. That’s a good way. “We’re going to do something in our family to make sure we all turn off the lights and get in that habit, and here is the reason why; here’s what we’re trying to contribute to.”

[Our children] need the resilience to recognize that they will make progress over time. They may not hit it every single time, but over a longer arc they will make a difference.

Some of the things we try will succeed and some of the things we try will fail, but we tried. You never have the successes if you don’t try. If I were giving parenting advice — and I want to be very, very humble about doing that. It’s always tough to be a parent. I want to be careful about that! — I think it’s important not to focus just on the extraordinary success story — “Look at this young person who built something that completely changed the world” — but also to spend some time focusing on things that didn’t work out — “But aren’t we glad that someone tried?”

EW: Someone said, “Oh, you failed 100 times.” He said, “No, I now know 100 things that don’t work. We’ve eliminated those. We’re going to keep going.” I think that’s the way we need to talk about it with children. It takes courage, and trying and failing. And trying again is about building resilience. I think more than anything, that’s what our children need now. They need the optimism that it takes to try. They need the resilience to recognize that they will make progress over time. They may not hit it every single time, but over a longer arc they will make a difference. And they will.

What was your favorite childhood book?

EW: Oh, The Little Engine That Could.

Did you read that one to your kids too?

Pinkie Promises is on sale now, wherever your favorite books are sold.