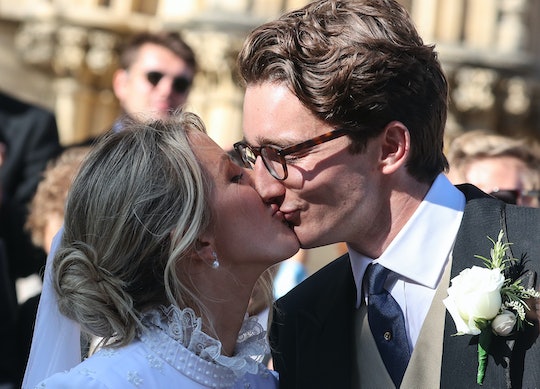 Ellie Goulding Reveals She's Pregnant & Her Due Date Is SO Soon

"It's definitely been a bizarre year..."

In a recent profile for Vogue, British singer Ellie Goulding announced that she is pregnant and is 30 weeks along with her first child with husband Caspar Jopling. So, yes, their little one will be here before we know it!

The "Love Me Like You Do" singer told Vogue that she and Jopling, the Sotheby's art dealer she married in August 2019, were both surprised to discover she was pregnant in 2020 when they went on a brief trip. "It was crazy because it was our one-year anniversary," she said. "That was not the plan."

Despite the fact that they were surprised, Goulding was excited nonetheless, especially about the changes pregnancy has brought to her body, "The thought of getting pregnant didn’t seem like it could be a reality," she told Vogue. "Becoming pregnant kind of made me feel human. I want a better word than womanly, [but] — I have curves I’ve never had before. I’m enjoying it. My husband’s enjoying it.”

There is at least one element of being pregnant during a pandemic that has served the famously private Goulding well — she managed to get to 30 weeks before announcing it to the world with a full profile. On her own terms, much like some other celebrities who were able to avoid their pregnancy news being leaked like Meghan Markle and Mindy Kaling, who welcomed her baby boy Spencer in 2020 without anyone even knowing she was pregnant.

Goulding and Jopling are doing things their own way. Even when it comes to the sex reveal, which she told Vogue is "not a focus" for her. Now that she is in her third trimester, Goulding is also thinking about the future, a future that will include being a working mom. "I’m excited to be a mother — but also I want to make sure that I continue to work,” she told Vogue. “I can’t wait to go back on tour. I’ve been in the studio most days, [and] I’m excited for the challenge. It will be a totally new experience.” It will indeed.