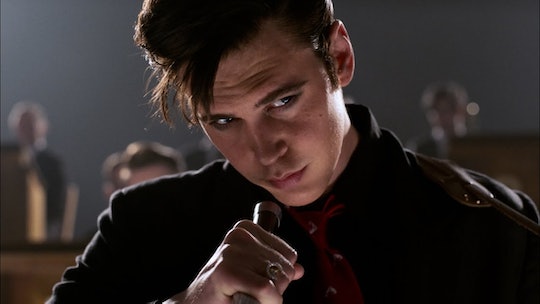 What Parents Should Know Before Watching Elvis With Your Kids

For starters, the Golden Globe-nominated film is just so long...

Elvis Presley’s life story feels like something that we all just sort of know without realizing we know it at this point. Even kids. We know his music, we know he died, we know about Graceland. But the 2022 Baz Luhrmann biopic epic Elvis on HBO Max tells a different side to the story, one that might not exactly be the kind of kid-friendly movie you were hoping to watch on a Friday night together. Here’s what parents need to know.

Elvis is a biopic told through the eyes of the singer’s infamous manager, Colonel Tom Parker (Tom Hanks), who documents Presley’s rise to superstardom with Luhrmann’s trademark maximalist directing style. The movie follows Presley (Austin Butler) from his early days as a performer through his time as arguably the most famous singer in the world, with mentions of his legendary Las Vegas residency and his controversial marriage to Priscilla Presley (Olivia DeJonge), who he had been seeing since she was just 14 years old.

As visually stunning as Luhrmann’s version of Elvis might be, the reality is that the life of Elvis Presley does not lend itself to something kids will want to watch. And some elements of his life, like gambling and drinking and drug use, might not be something you want your kids to watch. More importantly, the movie depicts a level of racism and racist attitudes that were far too prevalent in the ‘50s and ‘60s that could be difficult to watch for kids, especially as it is depicted in a way that could be seen as entertaining rather than educational. There is some foul language, as Common Sense Media points out, and a lot of sexuality.

The movie is super long.

If the adult content of Elvis isn’t enough to have you reconsidering allowing the kids to watch, think about the run time of 2 hours and 39 minutes. Think about how many episodes of Bluey that is and try to imagine your kids sitting still for that long. Now imagine Bluey is Elvis.

What is Elvis rated?

Elvis has a PG-13 rating for strong language, substance abuse, smoking, and suggestive material. And don’t forget it’s super long, too long for many kids to sit through. Kids over the age of 13 might enjoy the film, or at least have the patience to sit through it and appreciate the artistry of both Luhrmann and Butler as Elvis.

Where can you watch Elvis?

It might not be for the kids, but you should certainly check out the Golden Globe-nominated biopic for yourself. You can watch it on HBO Max ahead of the awards ceremony on Jan. 10 to see if you think it’s up to snuff. Just remember to carve out a solid chunk of time for yourself to watch.

More Like This
What Parents Need To Know About Marvel's New Movie Ant-Man & The Wasp: Quantumania
'Velma' Starring Mindy Kaling Is A Raunchy Treat To Stream After The Kids Go To Bed
'Titanic' Is Returning To Theaters In Honor Of The Movie's 25th Anniversary
Pixar’s 'Turning Red' Is Nominated For An Oscar — Here’s How To Watch It Right Now
What Parents Are Talking About — Delivered Straight To Your Inbox