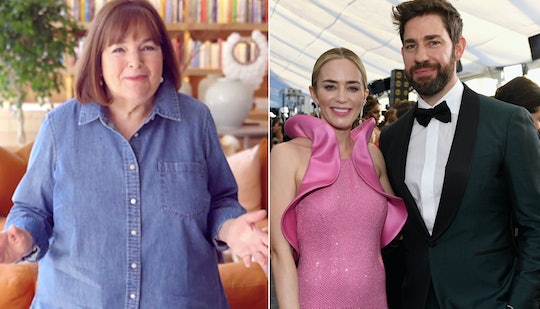 And you can make it too.

Who really knows what makes a couple fall in love with each other? Is it chemistry, is it destiny, is it chicken? My money is on chicken, especially after Emily Blunt admitted that’s “all it took” for John Krasinski to fall in love with her. Blunt apparently cooked a meal for him and that was that. History written.

The Mary Poppins Returns star married Krasinski in July 2010, and since then the couple have welcomed 7-year-old daughter Hazel and 5-year-old daughter Violet. They’ve also made two movies together — A Quiet Place and its sequel — and supported each other’s careers along the way. So how did this dynamic duo get started?

“I guess I just made something I knew he would love,” Blunt explained on the River Cafe Table 4 podcast. "A roast chicken, who doesn't love roast chicken? The roast chicken I love is [Barefoot Contessa star] Ina Garten’s roast chicken. It's called her ‘Engagement Chicken' because I think when people make it for people they get engaged or something.”

I suppose Blunt and Krasinski owe Garten a bouquet of flowers or something for her delicious recipe for Engagement Roast Chicken.

What makes it so special, you ask? “Lemon, garlic, onions up the chicken, thyme, salt and pepper, all that," Blunt explained. "You scatter onions around the chicken, but you pack them in really tight into the tray. And then you roast them really high [for] about an hour and 20 minutes and they're done and they're perfect."

Although to be fair, it sounds as though Krasinski didn’t need that delicious chicken to fall in love with Blunt. He told Ellen DeGeneres in 2011 that it was basically love at first sight when the two met in 2008. “I met her and I was so nervous. I was like, ‘Oh god, I think I'm going to fall in love with her.' As I shook her hand I went, ‘I like you.’” So I guess she could have skipped the chicken.

Blunt isn’t the only star who made her new fiancé a roast chicken. Meghan Markle also made Prince Harry a roast chicken the night that he proposed. If that was also Ina Garten’s Engagement Chicken, she should consider putting a patent on that recipe real quick.

More Like This
Chrissy Teigen Revealed Her New Baby Girl's Unique Name With A Precious Family Photo
Lisa Marie Presley’s Daughter Posted A Beautiful Throwback Photo With Her Late Mom
Does The FDA's Plan To Limit Lead In Baby Food Go Far Enough?
The Sweetest Things Paul Rudd Has Said About Being A Dad
What Parents Are Talking About — Delivered Straight To Your Inbox