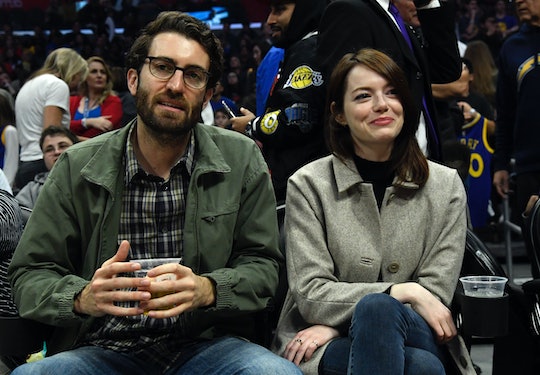 Emma Stone Has Given Birth To Her First Child

The actress reportedly welcomed her little one earlier this month!

Although news just broke today that Emma Stone has reportedly given birth to her first child with husband Dave McCary, the Cruella star has apparently been enjoying life with her newborn for roughly two weeks already. Romper’s request for comment from Stone’s representative was not immediately returned, but TMZ has reported that 32-year-old actress welcomed her little one on March 13.

TMZ reported on Friday that Stone gave birth earlier this month in Los Angeles, although no further details about the sex of the baby or the name were revealed. The La La Land actress does not have social media, so photos of her little one will presumably not be forthcoming, but that doesn’t mean she isn’t excited about her baby, of course.

A source who claimed to be close to Stone told Us Weekly in January that she was “very happy” to be expecting her first child. “She seems very happy and very excited about becoming a mother — she’s constantly oohing and cooing,” the source told the magazine. “She looks great, she looks healthy, she’s glowing. She’s been keeping up with friends and work lately, she’s always staying active and gets her daily exercise in.”

Stone and her husband, who’s a writer on Saturday Night Live, managed to keep a low profile throughout her pregnancy, which of course was fairly easy to do during a pandemic. The couple reportedly married last fall in a private ceremony after three years of dating, according to ELLE. As private as Stone and McCary both have been throughout their relationship, news of Stone’s pregnancy was announced after she was photographed by the Daily Mail in January with a visible baby bump. The last time she was photographed in public was on March 5, very late in her pregnancy.

Emma Stone is a mom.

In a conversation for ELLE back in 2018, Stone spoke to her friend, actress Jennifer Lawrence, about her changing expectations about the possibility of becoming a mom. "My perspective about kids has changed as I’ve gotten older," she explained. "I never babysat or anything. As a teenager, I was like, I’m never getting married, I’m never having kids. And then I got older and I was like, I really want to get married, I really want to have kids."

And just a few years down the road, Emma Stone is now married and a new mom.