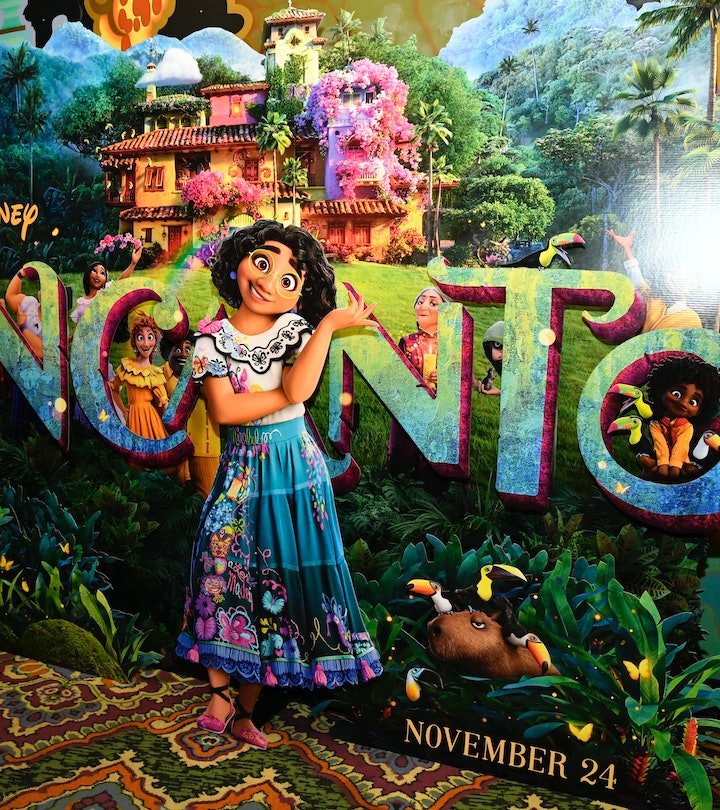 Here's An ‘Encanto’ Family Tree, Because Honestly, It’s Hard To Keep It All Straight

Let’s talk about Bruno, shall we?

From the very first scene in Disney’s animated hit Encanto, fans know this is going to be a movie about family. Mirabel Madrigal’s big, close-knit, extra magical family, to be exact. The first song of the movie is “The Family Madrigal,” after all. And here is what we learn from that song: there are a lot of Madrigals. A lot of cousins, a lot of aunts and uncles. Just a lot of people dealing with their amazing powers and even more importantly, dealing with each other.

So who are the Madrigals? What does their family tree look like?

The matriarch and patriarch of the Madrigal family, Alma and Pedro were the ones who started it all. When they were young parents themselves they were forced to flee their village after it was invaded by armed marauders. Sadly, the marauders followed them and Pedro was killed as he tried to protect his family by distracting the invaders.

After his death, Alma was left hopeless and alone with her triplets, Julieta, Pepa, and Bruno. It was at that moment when she, and the rest of her family to follow, were blessed with a miracle in the form of a candle. The marauders were vanquished, and La Casa Madrigal was formed to protect their magical family.

Of course, we know things ended up being more complicated than that as Alma’s three children grew and had families of their own.

Pepa and Félix are married.

Pepa Madrigal is the daughter of Alma and Pedro. She is married to Félix and together they have three children. Félix seems to be a perfect match for Pepa, especially since her magical gift is that her mood affects the weather and he needs to try to keep her happy if he’s looking to stay out of the rain.

Pepa and Félix are parents to three children, Dolores, Camilo, and Antonio. Antonio is especially close to his cousin Mirabel, and learns from a young age that his gift is talking to animals. As for his older brother and sister, Dolores has the gift of super hearing while Camilo can shapeshift. So a pretty impressive family all around.

Julieta is Alma’s other daughter, and her magical power makes her a real maternal force; she can heal people through the magic of food. Imagine having the power to cure illness with baked goods; that is Julieta. She married Agustín, and together they are pretty much the most loving parents a person could ever want. Fortunately for their three children.

Isabela, Luisa, and Mirabel Madrigal are three sisters with very different personalities. Isabela is a real green thumb, especially since she has the magical power to create plants and flowers without effort. Luisa has the gift of truly awesome strength and isn’t afraid to use it. When it comes to Mirabel, however... that’s where the crux of the movie lies. She doesn’t actually have any magical power, although she does eventually learn that she is amazing at keeping the Madrigal family together.

And for such a powerful family, that’s basically like the greatest power possible.

Unless you’re willing to talk about Bruno, that is.

The only son of Alma and Pedro Madrigal, Bruno is the real black sheep of the family. As a young boy, he was given the gift of being able to see into the future, and he ran away to protect his family from his visions. He lived inside the Casita’s walls until he was found by Mirabel and brought back into the family. Bruno has no children but is a loving uncle to his nieces and nephews.

The Madrigal family are more than their magical powers. They are a loving, complicated, amazing group of people who choose to love each other.

And that’s what really makes up a family tree.

More Like This
'Hocus Pocus 2' Officially Has A Release Date To Look Forward To
Exclusive Eureka! Clip Introduces Star Of Disney’s New STEAM Preschool Series
10 Of The Raddest Movies From The '90s To Watch On Girls Night
Kristen Bell Just Hinted That 'Frozen 3' Is Maybe (Hopefully!) In The Works