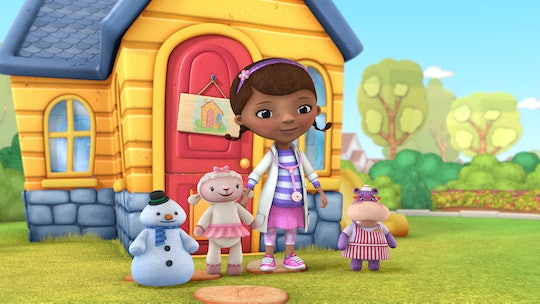 Exclusive: Doc McStuffins Is Celebrating 10 Years On Our TVs With A Fun New Music Video

Here’s a birthday party kids everywhere are going to want to celebrate: Doc McStuffins is turning 10 years old! In an exclusive new clip from the adorable Disney Junior series, Doc McStuffins celebrates the milestone with her pals/patients.

Making her debut on Disney Junior on March 23, 2012, Dottie “Doc” McStuffins is, as her legions of fans young and old are well aware, an adorable freckle-faced young girl with dreams of becoming a doctor just like her pediatrician mom. So she practices on her dolls and her stuffed toy friends, helping them out with little ailments with her extra-special magical stethoscope. A stethoscope so magical, in fact, that she can travel through time and try out other supernatural adventures.

To help mark the the popular show’s milestone, Disney Junior shared an exclusive look at the music video for Walt Disney Records’ new digital single “The Doc Is 10!” performed by Laya DeLeon Hayes. The music video will premiere on the actual 10th anniversary of the show’s premiere on Wednesday, March 23 on Disney Junior. What’s more, the channel is also airing a Doc McStuffins marathon on the special anniversary and there will also be a global live-stream of Doc McStuffins shorts on Disney Junior’s YouTube channel. So you can probably consider your kids’ screen time set.

Disney Junior also shared with Romper that a new animated music special inspired by the Doc McStuffins is set to debut later in 2022.

Doc McStuffins has broken lots of new ground since it first aired in 2012. The Peabody-award winning series created by Chris Nee was the first animated series for preschoolers to feature a Black female lead, and has gone on to entertain and inspire little ones for a full decade. That is definitely something to celebrate.