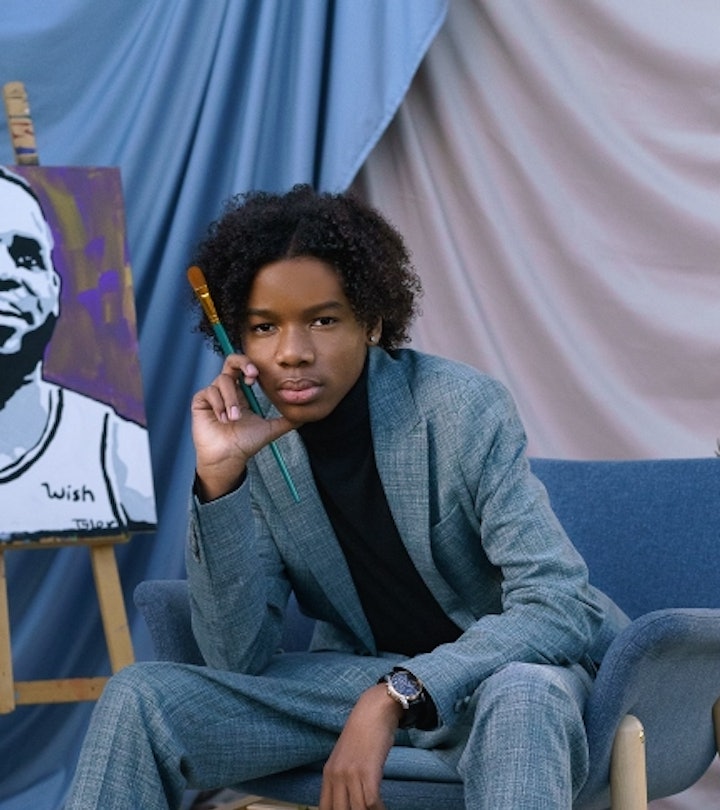 His first photo book, WE CAN: Portraits of Power, hits shelves this fall.

Tyler Gordon may be famous for his vibrant, deepening portraits of influential figures such as Vice President Kamala Harris, Lebron James, and most recently, Michael B. Jordan and Prince Harry and Meghan Markle. As a matter of fact, his portrait of James was the cover of TIME’s December 2020 issue. But despite his star features, Gordon tells Romper while exclusively revealing the cover of his first photo book, WE CAN: Portraits of Power, he has yet to paint his most desired icon — his mother.

“From the hundreds of paintings that I have done over the past few years, she is the one person I have never painted,” the 14-year-old painting prodigy says. “I always say the day I paint her is the day I paint my ultimate hero.”

Before gracing a national publication, going viral for his painting of Harris, and getting a thank you call from the vice president herself, which he says was “so exciting,” Gordon was just a California kid who loved to paint. But growing up, he also dealt with his own health struggles. Gordon was born deaf, an official diagnosis that was not discovered until he was 6 years old. And after a life-changing surgery that allowed him to speak, he developed a stutter. Art became his outlet and he started painting at 10. So revealing the cover of his picture book during National Stuttering Awareness Week, which goes from May 10 to May 15, was extra meaningful.

Gordon says he admires influential figures he calls “social disruptors” like Colin Kapernick and Stacey Abrams, which he promises we can see in his book. His personal favorite? His portrait of the late Chadwick Boseman. “Chadwick was an awesome actor and an amazing person and we lost him too soon,” Gordon says, adding that Black Panther is his favorite movie, a role which Boseman immortalized.

The heart-shaped herb is what gave the fictional King T’Challa his superpowers. But if there was one superpower Gordon could possess, he tells Romper it would be mind control. “I would use it for good though!” he says. “I would want to change everyone's vision of each other so that we all see one another as the same and our differences don’t matter anymore.”

Though that may be tough, Gordon does have some sage advice for fellow young artists. “There are no rules to art so do what you want and use your imagination to the fullest,” he says. “It's easy to get caught up in the right and wrongs of art, but I always believe that there are no rights or wrongs. If you do what feels right and what inspires you then you can't fail.”

Since following his own advice, he became a recipient of the Global Child Prodigy in November 2020. His portrait of Vice President Harris made him an overnight, viral sensation that has been changing the narrative with each swipe of his paintbrush. And soon, his new book will take him into overdrive.

At the end of the day, when the canvas is dry and the paint bowls are clean, Gordon is a young Black man who lets his work speak for itself. You don’t have to have a big stage to make a difference. Gordon inspires us to look to our own talents and realize that with them, we’re more powerful than we give ourselves credit for.