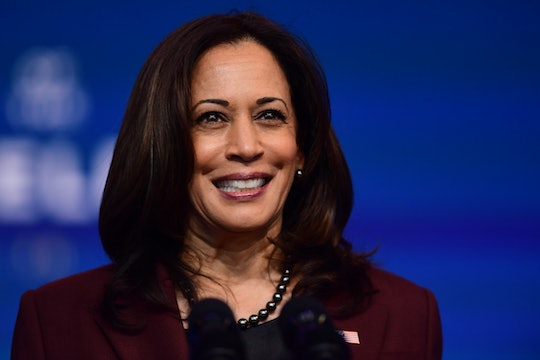 The young artist received a heartwarming phone call from the vice president-elect.

The Biden-Harris power team hasn't started their first day in the Oval Office yet and they're already getting portraits done, thanks to a talented young artist who painted the likeness of the vice president-elect. And don't worry, she noticed. In fact, after the amazing portrait went viral on social media, Kamala Harris called the teen to thank him for his work and told him he has a "gift."

On Nov. 22, Tyler Gordon, the 14-year-old teen artist, asked folks on Twitter to retweet and tag a timelapse video of him painting Harris near the Golden Gate Bridge, in hopes that she would see it. "My name is Tyler Gordon and I'm 14 years old and I live in the Bay Area! I painted this picture of you and I hope you like it!!! Please Rt and tag her so that she can see this. Please!!!" he tweeted, tagging Harris, President-Elect Joe Biden, and Harris' husband Doug Emhoff.

Well, the wheels of social media started churning and his fans got to work. Chelsea Clinton even helped spread the word by tagging Harris and told the vice president-elect to check out this "beautiful portrait of you." Three days of retweets and tags paid off; on Wednesday, Nov. 25, Tyler received a call from Harris herself and shared a video of the exciting conversation with his followers on Twitter.

"Oh my God, I'm just overwhelmed with just the magnificence of your artistry," Harris told him. "You really have a gift, my goodness. I was so touched to see it."

Harris told Tyler it's very special to be an artist like he is because it's a gift that he can give to so many people, some he may never meet but will be touched by his work. But Gordon could possibly meet one of biggest admirers. "One day when I'm in Oakland, the place of my birth, I hope to meet you in person," Harris told Tyler. "It means so much to me. And for you to be my homeboy and to do that kind of thing, it really touches me."

After hearing about the call, Clinton suggested the artwork should go to D.C. with Harris. "His portrait of her deserves prime placement in Number One Observatory Circle (where VP Harris & @DouglasEmhoff will live Jan. 20th)," she tweeted.

Tyler told CBS News it took him 51 minutes to complete the acrylic portrait of Harris. And he got to work again a few days later with a portrait of Biden, which he shared a timelapse video of as well. "I couldn't have one without the other," he tweeted. "I painted @JoeBiden because he stutters just like me. He showed me that speaking slowly kinda masks a stutter."