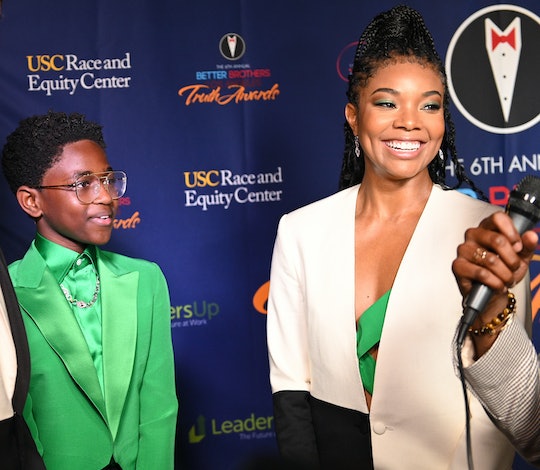 Did you catch that fun little nod?

Which do you prefer: Skechers or Prada? In the Wade household, it’s all Prada, which is a nice little upgrade from Gabrielle Union-Wade’s 10 Things I Hate About You days. In a fun, Instagram video, the actress who starred in the 1999 rom-com gave us major nostalgic vibes with the help of her stepdaughter, Zaya.

In a video posted on June 1, Union-Wade struts down the stairs with her Prada Galleria bag and tosses it to Zaya at the bottom. When she tosses it, the pair swap places, outfits, and bags. “We like our Sketchers but ❤ our #PradaGalleria bags,” Union-Wade captioned the clip, adding the hashtags, #HappyPrideMonth and #10ThingsIHateAboutYou.

If you remember, the original — and, yes, iconic — line from the movie was, “There's a difference between like and love. Because I like my Sketchers... but I love my Prada backpack,” an exchange between Union-Wade’s character, Chasity, and Larisa Oleynik’s character, Bianca. Chasity then says, “But I love my Skechers,” to which Bianca responds, “That's because you don't have a Prada backpack.”

“I love your support,” one viewer commented under the post, referring to the Being Mary Jane’s actress unshakable love for her 14-year-old stepdaughter since Zaya officially came out as transgender last year.

Orange Is The New Black star, Laverne Cox, wrote under the post, “Beautiful.” And Dwyane Wade gave kudos to his leading ladies and commented, “Too easy.”

Zaya just turned 14 on May 29 and celebrated with a rollerskating party over the weekend. For her birthday, the Bring It On star penned a touching post for her stepdaughter. “We ❤ you so much and we are so proud of you,” she wrote on her Instagram May 30. “Keep shining my 🖤.”

Whether they’re strutting down the stairs with a Prada bag in hand or making us remember our favorite ‘90s movies, fans really can’t get enough of this mother-daughter duo. Now, how do we get them to recreate a Bring It On scene next?