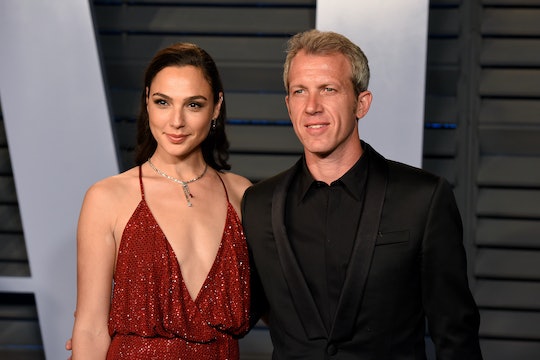 Gal Gadot Is A Mom Of 3! Get To Know The Actress’ Sweet Family

Wonder Woman indeed. Gal Gadot announced that she had given birth to her third baby on Tuesday. The busy actress shared the news along with a photo of her family of five, and the entire crew looked content as could be.

Gadot first announced that she was expecting a third baby back in March with an Instagram post featuring her husband Jaron Varsano and their two daughters curled up in bed together. Varsano had his hand on her stomach as the entire family grinned from ear to ear. “Here we go again,” Gadot captioned the photo.

In a way, being pregnant and giving birth is almost like training for her iconic role as Wonder Woman for Gadot. “It's cheesy, but I feel like Wonder Woman when I give birth,” she said in 2017. “When you deliver, you feel like you're a god. Like ‘Oh my God, I made this.’”

Now she is a mother three times over, and by her own description, something of a goddess three times over. So let’s meet the little people who make Gal Gadot truly feel like Wonder Woman.

Of course, it all starts with her husband. Gadot has been married to real estate developer Varsano, who she met at a party in their native Israel in 2006, since 2008. She told Glamour in 2016 that it took her some time to realize that Varsano was “The One,” but that was not the case for her future husband. “He's 10 years older than me. He told me on our second date he was serious and wasn't going to wait more than two years to ask me to marry him,” she told the magazine.

Varsano and Gadot have built a marriage on mutual respect for each other, career choices included. "I think that Jaron and I make a really good team,” she told TotallyJewish.com in 2011, “I understand his career and he understands mine. We help each other progress in all areas of life. We're both very career driven."

They appear to be pretty family-driven, too.

Gal Gadot is mom to Alma.

Gadot welcomed first daughter Alma in 2011, and right away she was thinking about the push-pull of her career and motherhood. “When Alma was around two, I was really anxious about how to travel with a child, moving her from one country to the other, all the different languages,” she told Glamour in 2016. “It was my husband who told me: ‘Gal, think about what kind of a role model you want to be. If you want to show Alma that she can follow her dreams, that's what you should do, and we will figure out the logistics.’”

Alma, like so many other kids in 2020, was dealing with remote learning last year. And her mother couldn’t help boasting a little about how her daughter was dealing with the challenge in an Instagram post from last August. “We’re in a different country than where school is, in a different time zone (Her school (zoom school) started at our evening) but you know what, she was so happy and excited to see her friends.. baby, I wish you and all the students out there a productive, interesting and successful school year.”

Gal Gadot is loving life as a mom.

The arrival of daughter Maya in 2017 changed the family dynamic, making Gadot a more relaxed mom. “With Maya, I'm able to enjoy it all much more,” she told Baby at the time. “I've also seen that having a second child changes the dynamics of your family, and I have to make sure that Alma still gets a lot of love and attention from me even though I'm spending so much time with Maya." One way she spends time with her daughters? On the set of Wonder Woman 1984, where they both had cameos.

Gal Gadot is a mom of three.

On June 29, Gadot shared the news of the birth of her third daughter, Daniella, on Instagram. Alongside a photo of the whole family in bed together with the new baby, she wrote, “My sweet family. I couldn’t be more grateful and happy (and tired) we are all so excited to welcome Daniella into our family. I’m sending all of you love and health.”

Gal Gadot’s husband and kids are clearly her pride and joy. High praise indeed from Wonder Woman herself.